Yucatan’s Hanal Pixan: How It Differs from The Day of the Dead in other parts of Mexico

The Day of the Dead is my favorite Mexican holiday. As a child I always loved Halloween and have had a cautious curiosity for anything from the world beyond. I love huge – possibly haunted – mansions and as anyone can see from my MID CityBeat Instagram feed, I have a fascination with century old houses that have been abandoned and left to the whim of the elements. Since living in Merida, I have been able to witness the deep connection Yucatecans have to this special time of year honoring the souls of their departed loved ones. One of the things that I have always admired about Yucatecans is that they keep many of their traditions alive by believing, practicing and teaching their children about them. They don’t just go through the motions; they truly pay attention to detail and live the experience.

As this time of year draws near once again and the country begins to buzz with calaveras, pan de muerto and Facebook Day of the Dead events, I began wondering about how this tradition got started in Mexico and my inquiring mind thought, “What is the difference between the Day of the Dead in other parts of Mexico and Hanal Pixan which is celebrated here in Yucatan? “ I decided to call my friend Dionne, who had invited my son and me to her house with her family last year on the 1st of November to share a pib, the traditional tamale of Hanal Pixan. She works at the university UADY and connected me with a professor of Mayan studies who then pointed me in the direction of the online archives.

Proclaimed in 2003, and in 2008 officially inscribed on UNESCO’s Representative List of the Intangible Cultural Heritage of Humanity, The Day of the Dead is recognized internationally as greatly important and bearing exceptional testimony to a cultural tradition. When we think of this celebration in Mexico, we tend to lump it all together as one national uniform heritage day, but it actually differs quite a bit from region to region. Many articles that you will read will say that it originates from the Aztecs, but that is not entirely true. There are more than 40 indigenous cultures in Mexico that have a long history of incorporating a celebration day of the dead. Each indigenous group receives the dead in different ways and some hold the beliefs that the dead are among the living for a whole month.

Hanal Pixan means “food for the souls” in the Mayan language. For the Maya, the pixan (soul) formed human life. It was a gift given by the gods to humans the moment they were born. Each pixan has specific strengths and weaknesses which form our characters as humans and our souls pass on to the other world when our physical body dies. They believed that the world between the gods and the dead were united by snakelike pathways. After the early body died, the pixanes would travel along these powerful pathways guided by the hairless, barkless sacred dog Xoloitzcuintli. These caminos, which were spiritually paved by ceremonial rituals and prayers, were the same pathways the pixanes would travel back upon when it was time for them to reincarnate and enter a pregnant woman’s womb. 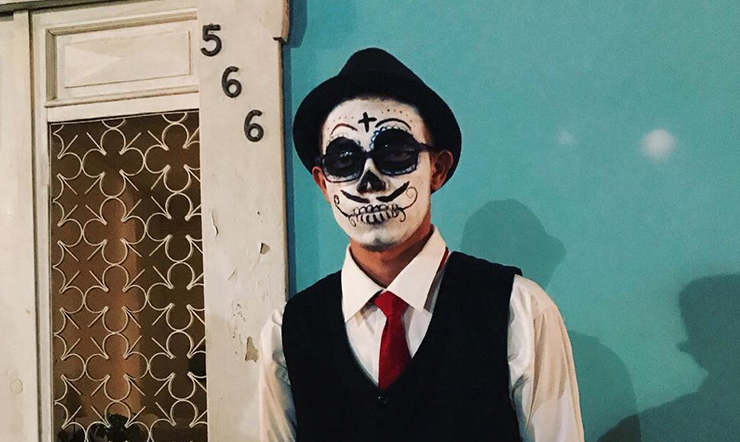 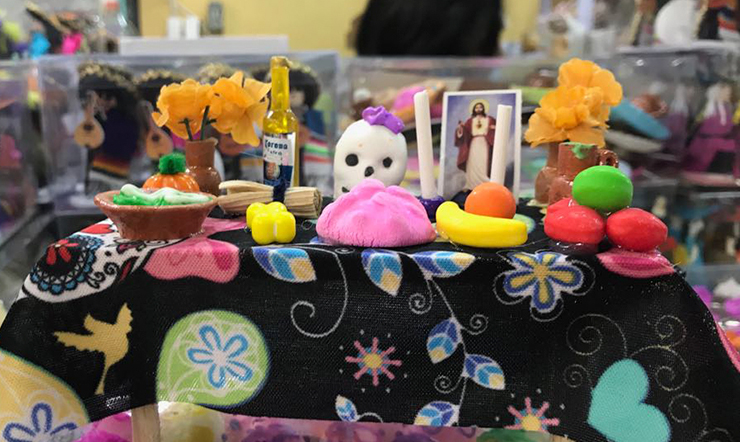 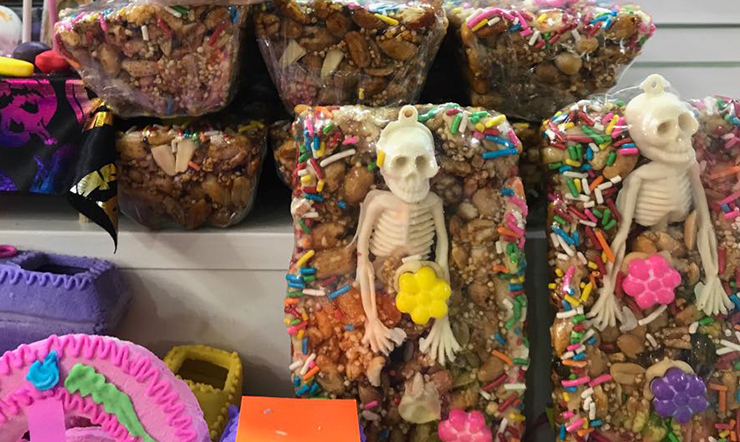 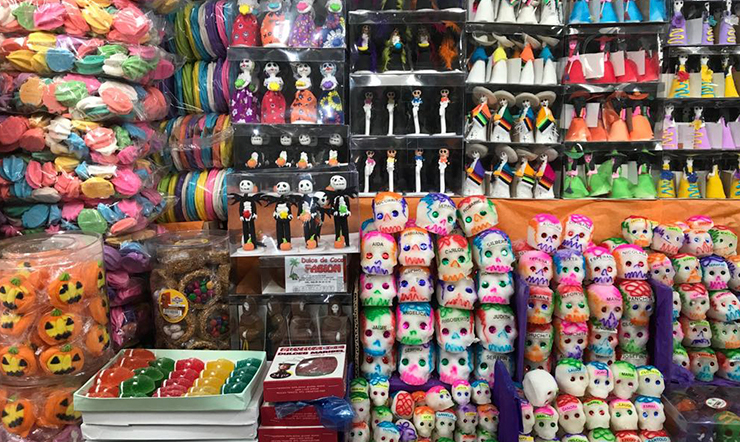 For the Maya, death was a very natural event. The body of commoners were usually buried under the floor in their house. The elite and politicians, on the other hand, were buried in beautiful and elaborate tombs. Their faces were covered in masks that were elaborately decorated with jade. Their heads were later cut off and boiled to preserve the skull and their bodies were incinerated, and ashes preserved in an urn. The skulls were painted and decorated with precious stones and were placed on family altars. The altars to their dead were rectangular and represented the earth, the foot of the tables where small thin tree trunks and tightly wound bark was placed on the table as a centerpiece. In the bark was placed pozole, cacao, corn, fruits, salt and other earthly delights so that the souls would have a happy encounter with Mother Earth.

When the Spanish got here in the early 16th Century, they unleashed both a political and spiritual conquest on the Maya and all indigenous cultures in Mexico. As you probably know, the Mayan people were enslaved and tortured. Sacred books were burned and worship of their gods was prohibited. Christianity was forced upon them. Nevertheless, despite all the horrendous tactics to convert the Maya to Christianity and stamp out their religious traditions, the Maya simply didn’t stop worshiping their gods and practicing their rituals. They would do it in secret, and they integrated the Spanish religious figures into their own. Their Junab K’uj, creator of the heavens, became God the Father and their human sacrifices were substituted for the sacrifice of Jesus on the Cross. The private burials turned into a funeral ceremony for everyone. Cremation was prohibited making it impossible for the souls to return to be reincarnated because there was no reincarnation according to the Christians. Instead, the tradition metamorphosed into a tradition where all the souls of the deceased returned to Earth for a lapse of 8 days in order to be with their families and friends. When those 8 days were over, they would go back to heaven. The Spanish evangelists knew they couldn’t do away with all the Mayan traditions so they designated Oct 31, Nov, 1 and 2 for all tribes of Mesoamerica to celebrate their dead. These dates coincided with the already established holiday All Souls Day which was celebrated in Europe.

During this time of year, every Mayan household improvised an altar and was able to hide in plain sight their ancient traditions of honoring their dead. Altars adorned by a green cross symbolizing Ya’axhce, the sacred ceiba tree, a lit candle, four gourds with atole–a corn based drink. The four gourds represented the cardinal points of the ceiba tree. They placed 7 stacks of 13 tortillas to remember the numbers of their calendar, 4 bowls with meat and pork. In other ceremonies they were sure to represent 21 offers in honor of their 21 gods.
The celebration consisted in lavishing the returning souls with food, drinks and prayers. The first day, November 1, was for the souls of children and the second day, November 2, was for the souls of the adults. The souls of the children arrived in the middle of the night on their respective day and candles would be lit by their tomb so that they could see the way. In the afternoon they were offered special meals such as yuca (taro root) with honey, atole, corn tortillas and sweets which were later shared among friends and neighbors when the prayers were finished. 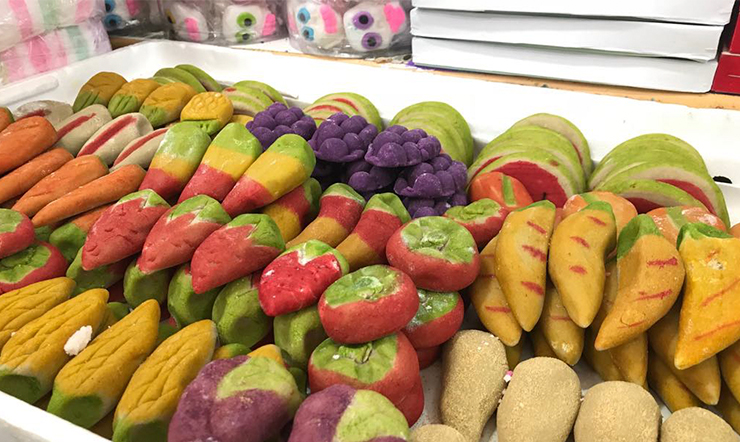 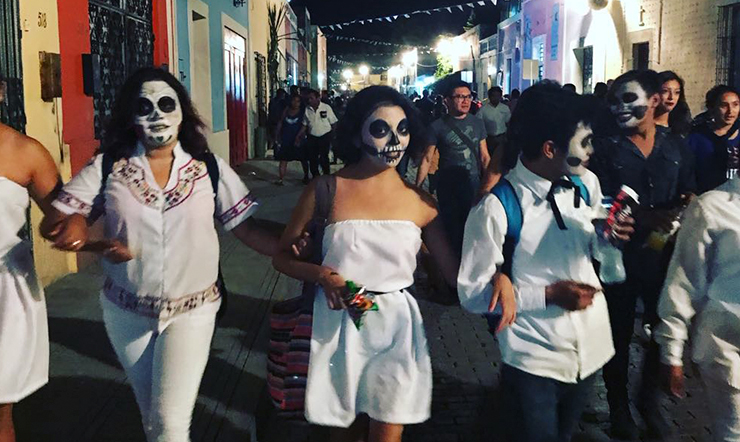 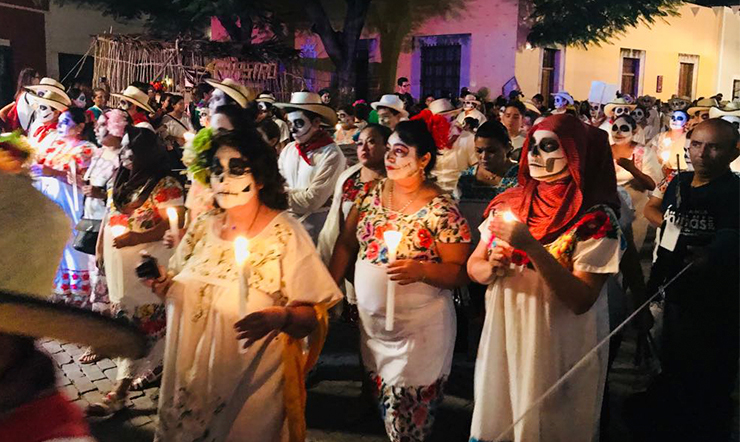 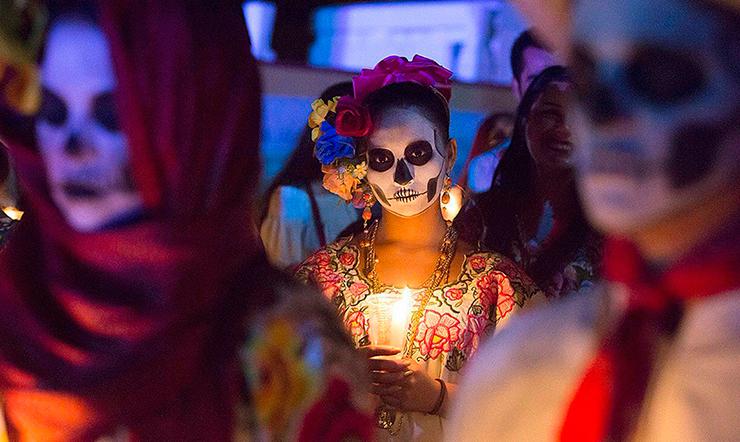 The souls of the adults were greeted similarly. They also arrived in the middle of the night. Their tombs were cleaned and decorated with flowers; however, they did not light any candles because it was believed that the adult souls could see the way. The altars were also filled with food and drink and an additional gourd was placed at the entrance of the house so that the forgotten souls would also be able to eat. On the 7th day (for the children) and the 8th day (for adults) after arriving back to the world of the living, the souls are sent off with another huge feast including, different types of pibil (traditionally prepared meat mainly pork) and of course pib, the tamale made only for Hanal Pixan, made with achiote, stuffed with hen meat, pork or wild turkey, and cooked underground

In modern times, Hanal Pixan is practiced by all Yucatecans from various social-economic and cultural backgrounds. All the schools teach about it and they eat the traditional food and decorate altars. In preparation for Hanal Pixan a great place to go is the Lucas de Galvez Market in the heart of Merida Centro where you can see all the vendors getting ready for those coming to buy traditional food for the altars and celebrations. There is an array of fruits, vegetables, meats, flowers, skulls made of sugar and various marzipans in form of corn, bread, squash and other seasonal foods. Days ahead of the coming of the souls, family members go to their tombs, they clean them and light candles and put flowers typically yellow or purple. 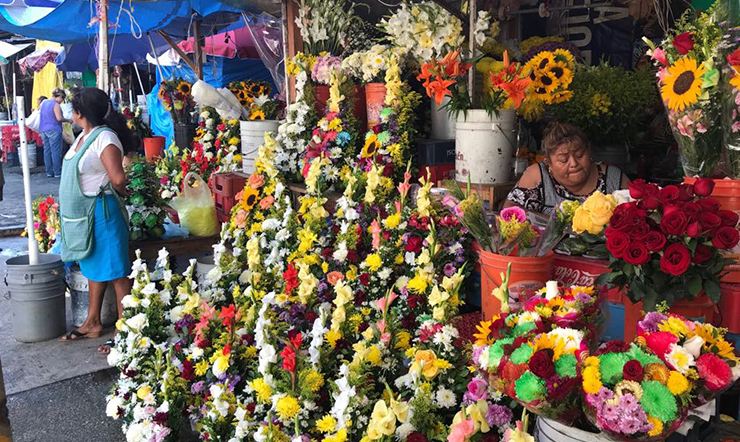 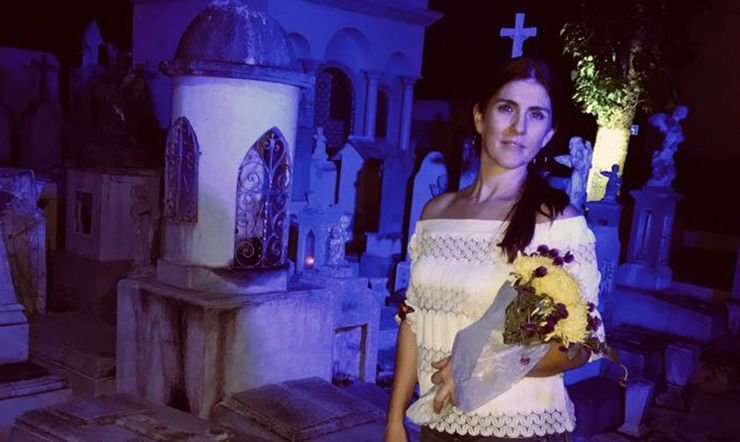 You will see altars not only in private homes, but also in local bakeries and shops. Various altars are displayed in the plaza grande in front of the main catheral and public areas all over the city of Merida. Each is covered by a tablecloth with traditional Mayan embroidery. A green cross, pictures of the deceased, drinks, fruits, flowers, candles, salt, a glass of water and sometimes cigarettes are place on the altars. Also, because the souls have travelled a long journey they have full traditional meals such as relleno blanco, escabeche, pork with beans, tamales and, of course, the mucbil pollos or pibs.

An event that cannot be missed if you are in Merida, is the Paseo de Animas (Parade of Souls) which happens on October 31st. It begins at 6 p.m. Wednesday, Oct. 31, starting at the General Cemetery and ending at the San Juan Arch. Music, altars, food and the parade of thousands of people with their faces painted as skulls, holding candles or simply walking down the road provide quite a spectacle. You can join in and paint your own face or get it pained there. It’s an amazing event.