Russian President Vladimir Putin defended his Venezuelan counterpart on Wednesday Oct. 3, saying that the assassination attempt against Nicolas Maduro was an act of terror and asked, “Are we going to approve these type of political fights?”

The Russian President on Wednesday condemned the attack on President Maduro that occurred last August in an attempt to take down the Venezuelan government insisting that the South American nation decide its own future.

“The terrorist methods to overthrow power in the country are unacceptable,” said the Russian leader during the International Energy Week in Russia, which examined the political factors that affect international oil prices.

Putin condemned the interventionist methods against Venezuela and stated that it is the Venezuelans who must determine the political future of their nation.

Venezuela’s Foreign Minister Jorge Arreaza said in a tweet in late September: “We are not accusing anyone, we have the statements of those involved in the failed assassination against Nicolas Maduro and evidence points to the embassies of Chile, Mexico, and Colombia.” 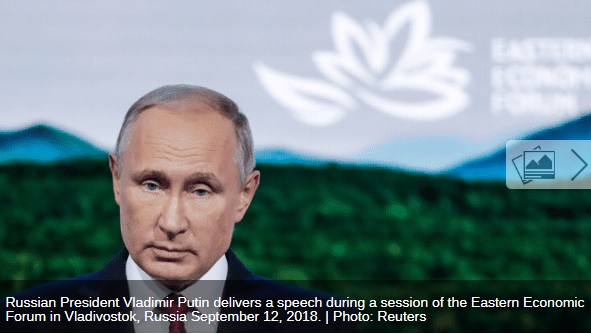 The Russian president added that it was “a matter of principles” to not harm the civilian population. He insisted that Venezuelan people “should have the opportunity to resolve the situation on their own.”

“No one should go into the pottery shop like an elephant without understanding what is going on just thinking that the elephant is the biggest and smartest animal,” he added at the meeting that runs from Oct. 3 to 6.

On August 4, during the Bolivarian National Armed Guard 81st anniversary celebrations, two drones packed with C4 explosives were detonated just overhead of Maduro while he was delivering a speech, injuring seven military personnel.

Out of fear for his life the Venezuelan president initially said he would not attend last week’s 73rd United Nations General Assembly. However, he later decided to attend and in his speech to the 193 member states denounced the economic sanctions placed on his country by the U.S. and its allies.

“Our nation is a country that is harassed and attacked. Yesterday, in this very place, the president of the United States of America spoke once again against the noble people of Venezuela,” the head of state said in front of the assembly on Sept. 26.