Hurricane Willa is expected to produce life-threatening storm surge, wind and rainfall over portions of west-central and southwestern Mexico.

Willa is currently located about 195 miles south-southwest of Cabo Corrientes, Mexico and is presently moving northward at a speed of 5 mph.

According to the National Hurricane Centre (NHC), the dangerous hurricane’s maximum sustained winds have increased to near 155 mph with higher gusts.

The hurricane is forecast to move toward the north-northeast and track over or very close to the Mexican islands Islas Marias on Tuesday October 23.

Then Willa will make landfall along the southwestern coast of mainland Mexico on Tuesday night or Wednesday morning. 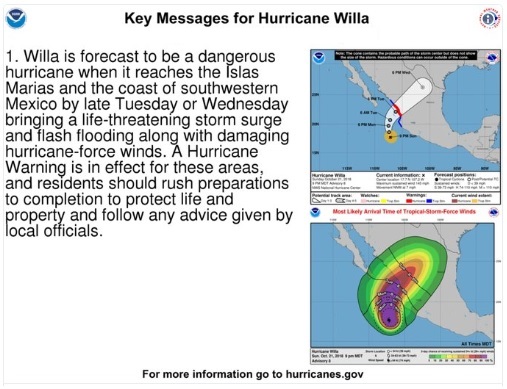 The NHC also predict that additional strengthening of Hurricane Willa is expected during the following 12 hours, meaning that it could reach Category 5 status later today.

It will then weaken slightly before making landfall but will still be a dangerous hurricane when it does hit.
Dangers for Mexico include torrential rain, hurricane-force winds and deadly storm surges.
The southwestern Mexican coast is warned to brace for dangerous storm surges which will impact on Tuesday Oct. 23. Heavy rainfall will also cause dangerous conditions, as six to twelve inches are forecast to fall.