Hurricane Michael takes aim at Florida coast as a Category 3

Tropical Storm Michael has been upgraded to a hurricane as it churns in the Gulf and is forecast to become a major Category 3 storm when it make landfall in the Florida panhandle mid-week.

Florida Gov. Rick Scott declared a state of emergency in 26 counties on Sunday. The Federal Emergency Management Agency has mobilized resources from the federal government to assist in preparation for its arrival.

“The Panhandle and Big Bend could see winds in excess of 100 mph,” Scott said at a briefing Sunday evening. “Remember, this storm could grow stronger and be a Category 3 hitting our state. This storm will be life-threatening and extremely dangerous.”

The National Hurricane Center announced the upgrade at 11 a.m. Monday, forecasting that the storm will become a Category 3 hurricane when it makes landfall Wednesday afternoon. 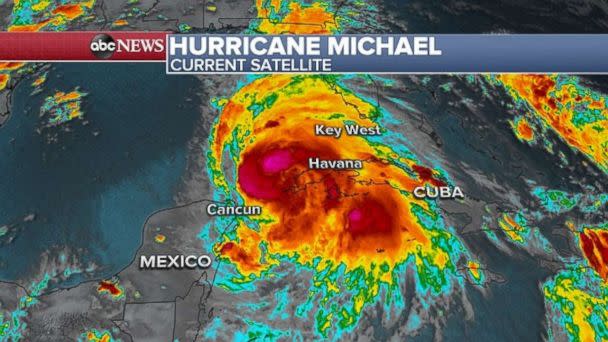 Michael had maximum sustained winds of 70 mph as of 7 a.m. on Monday. It is currently located 50 miles west of Cuba and 140 miles east of Cozumel, Mexico.

The National Hurricane Center is forecasting storm surge between 7 and 11 feet in certain areas, Scott said Monday. The NHS warned of a “risk of “life-threatening storm surge.”

A tropical storm watch has also been issued for the Alabama coast, including Mobile. 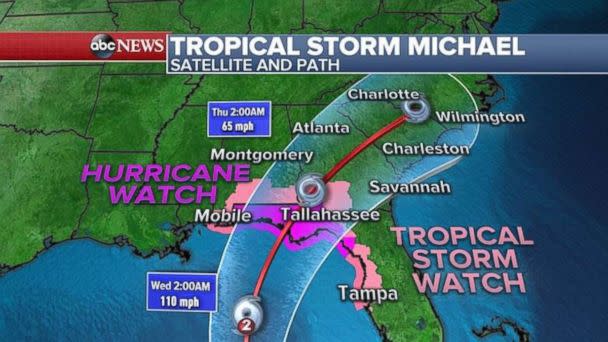 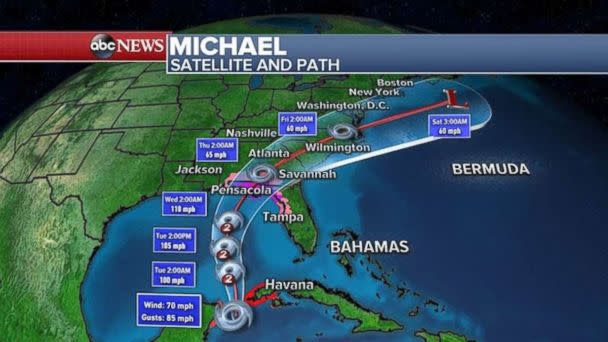 The storm will move further inland later in the week and bring rain and wind to Georgia, South Carolina, North Carolina and Virginia. The Carolinas and Virginia were blasted by Hurricane Florence last month, which dumped more than 2 feet of rain in some locations and caused record flooding.