The traffic of endangered species in Yucatan is not a secret, and the Federal Attorney’s Office for Environmental Protection (Profepa), in different administrations, haven’t done much about it.

Tenants of the San Benito and Lucas de Gálvez markets, in downtown Mérida, point out that the operations that the federal agency has carried out are totally useless, since there’s always somebody that ” blows the whistle” to let everybody know about the presence of the inspectors, with enough time in advanced so that, they can hide the bird cages, so everything is “in order” by the time the inspection is carried out.

Close to the chicharroneros, at Mérida’s Lucas de Galvez mercado, it is easy to see the cages from afar and perceive the smell of the enclosed animals, parrots of different kinds, ducks, chickens, rabbits, curies, and many other animals crammed in unhealthy conditions.

The performance of Profepa has been limited to the confiscation of meat, mainly deer and other endemic species of the Yucatan Peninsula, but they rarely confiscate live animals.

Profepa Director, José Lafontaine Hamui, says that the authority is overwhelmed, because when a complaint is received, people communicate through social networks, and this makes it impossible to act against these crimes.

He indicated that the citizen complaint is more effective, as was the case of a spider monkey that was rescued from a house in the west of Mérida, which was injured and unhealthy. 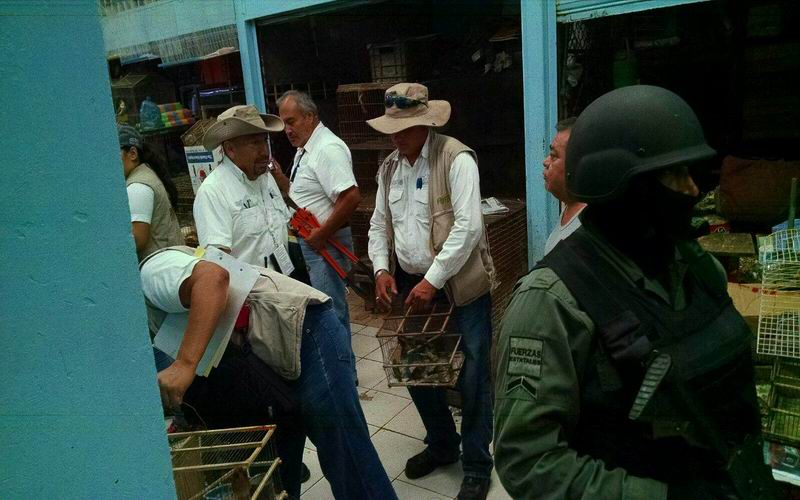 A man known as Jorge “El Mocho”, about 50 years, has been identified as the one responsible for this illegal trade activity in the Mérida markets, he handles endangered species, mainly felines, such as ocelots, tigrillos and jaguarundis, and birds, such as owls and parrots, It is said that the man conceals these animals in different properties across Mérida.

These people breed domestic cats and wild cats hybrids, semi-wild animals which are of great demand due to their beautiful colors. These animals are spay and neutered, so they do not reproduce and people have to go back to the supplier to acquire more.

These felines  are traded in social networks, they are pure wild animals that when combined with domestic cats create new species and are highly demanded in the black market.

It is being said that these criminals sometimes even crush the heads of parrots, owls, hawks or eagles, to stop them from making noise when the operatives take place, as they rather lose the animal than go to jail, even if that means economic loss.

The parrots and small cats come from the jungles of the south of Quintana Roo, Campeche, Tabasco and Chiapas, and are often transported in second class trucks with the complicity of the drivers, referred to as “animal traders”.

“The poor animals are transported in cardboard boxes and plastic bags; the cockatoos are put in black bags, because they are very expensive, and many of these birds don’t make it through the journey, and arrive dead, “said one of the tenants.

“Animals such as tigrillos and ocelots can cost up to 30 or 40 thousand pesos, they are the finest of the small felines and have great demand” the tenant explained.

TYT Newsroom with information of laverdadnoticias.com