In search of better living conditions and security, last October 12, thousands of Central American migrants left San Pedro Sula, Honduras, with the objective of crossing through Mexico to reach the United States and get a better-paid job.

On October 19, about three thousand people from Central America arrived on the southern border of Mexico, where they tried to stop the passage of migrants, but the fence was broken allowing thousands of people to pass.

For 52 percent of Mexicans, free access to migrants should be allowed, since they only look for better opportunities.

According to a statement from the polling company De las Heras Demotecnia, while some Mexicans on the southern border have shown support for migrants by offering water and food, another group of people is against the migrant caravan, as  48 percent are against these migrants, because its passage will bring problems of employment, security, and services. Meanwhile, 72 percent believe that a border wall would not solve the problem of migration and only 21 percent agree with this position. 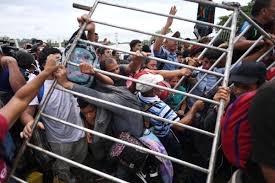 According to De las Heras Demotecnia, 59 percent of the respondents believe that the treatment that Mexico gives to Central American migrants is better than that received by Mexicans in the United States , while 21 percent say that the treatment is worse, and 9 percent One hundred thinks it is just as bad.

On the issue of migration, President-elect Andrés Manuel López Obrador said that his government will give work visas to Central American migrants , as he assures that there will be jobs in Mexico for both Mexicans and Central Americans.

On this position, 39 percent of Mexicans support the opinion of the president-elect, but 46 percent do not believe that this proposal can be fulfilled.

On the other hand, the next secretary of the Interior, Olga Sanchez Cordero, said that migrants could be given work in such important works for the next government, such as the Mayan Train, to which 56 percent of Mexicans would agree with this proposal, while 38 percent is not.