Mr. Dennis Lafoy is an American citizen that moved to Mérida almost forty years ago, back in 1980.

He speaks very good Spanish and the man probably knows the “White City” better than most Yucatecans.

Twenty two years ago, Dennis started organizing a dinner on the first Friday of each month, inviting a good number of Expats, whom had made Mérida their new home.

He has seen a considerable amount of people come and go from the Land of Mayab, some of them staying for as long as a few months, and some other remaining here for decades.

Most of the American citizens that stay definitely in Merida, are retirees that decided to move out from their country of origin looking for a quiet, safe and sunny place to live, where their dollar “goes a long way”, and they don’t have to worry about “the rat race” anymore.

So Dennis has been in contact practically with all restaurants in Mérida at some point in time, in order to organize the “first Friday of the month” dinner. Many of these places are long gone and forgotten, while others open their doors and become iconic in the state capital.

And this is the case of Tobalá 58, a unique Cevichería & Bar that was recently inaugurated in the heart of downtown Mérida.

Elaborating the Tobalá 58 concept and preparing it to the finest detail took the owners about a year. They started with the idea of ​​creating a successful business project that would contribute at the same time to the economy and international image of the city as a world-class tourist destination, not only in the eyes of foreigners, but of locals as well.

When Tobalá 58 realized the enormous market of locals and foreigners eager to enjoy a good meal based on high quality ingredients of the sea in a nice and pleasant atmosphere featuring an excellent service accord to international standards, the decision was made to focus on the offer of seafood with a unique and incomparable flavor that distinguishes Tobalá 58 as one-of-a-kind restaurant, as well as a bar serving drinks inspired by the tropical climate of the Yucatan, featuring traditional Mexican liqueurs such as mezcal, tequila or xtabentún. 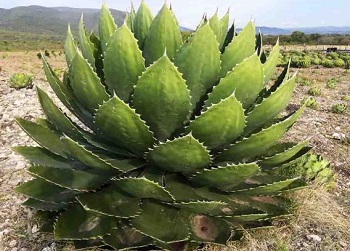 The Tobala maguey is found growing naturally only in the highest altitude canyons in the shade of oak trees like truffles.

Tobala’s form is different than the maguey Espadin (sword) or maguey Azul (blue agave). It is smaller and broader leafed. It takes about eight Tobalá piñas (agave hearts) to equal one piña from either of the more commonly cultivated Magueys.

One of the most important parts of the plan was to have the ideal location, an exhaustive scouting was carried out by the Tobalá 58 team, until they finally found the perfect place.

Located right at the corner of two of the most iconic streets of Mérida’s historical center, 58 and 51, Tobalá 58 decided to establish its venue in an old Yucatecan house dating from the early XX Century that immediately evokes a colonial air.

For months the concept and identity of the organization was carefully planned, in order to create the brand known today as Tobalá 58.

The name Tobalá comes from one of the most rare and valued agaves (the king of the agaves), used for the production of artisan mezcal, a liquor currently considered one of the most appreciated and fashionable elixirs that represents Mexico and its traditions in the eyes of the world. Then, the number 58 was decided to be used as part of the brand name, highlighting one of the most emblematic streets of Merida, where Tobalá is located.

The concept “Maridaje de Experiencias” (experience pairing), which characterizes the brand, consists in matching their delicious seafood dishes with exclusive cocktails and drinks that are original creations of Tobalá 58.

Finally, the concept has been reinforced with an effective strategy in social networks (Facebook, Twitter and Instagram), which positions the brand firmly and frontally among an audience of all ages in the capital city of Yucatán.