The Popocatépetl volcano located 50 miles east of Mexico City, has registered six explosions in a 24-hour period, of which five occurred between 6:20 and 6:40 on Saturday Sep. 15. During one of these eruptions, incandescent material (lava) was expelled 300 meters high above the crater.

According to the report of the National Center for Disaster Prevention (Cenapred), through the Popocatepetl volcano monitoring systems, 114 exhalations were identified, accompanied by water vapor, gas and light amounts of ash.

Scientists of the agency reported that a volcanotectonic event was recorded on Saturday at 9:36 am with a preliminary magnitude of 1.7, as well as 158 minutes of low amplitude tremor.

Popocatépetl is an active stratovolcano, located in the states of Puebla and Morelos, in Central Mexico, and lies in the eastern half of the Trans-Mexican volcanic belt. At 5,426 meters (17,802 ft) it is the second highest peak in Mexico, after Citlaltépetl (Pico de Orizaba) at 5,636 meters (approx. 18.620 ft). 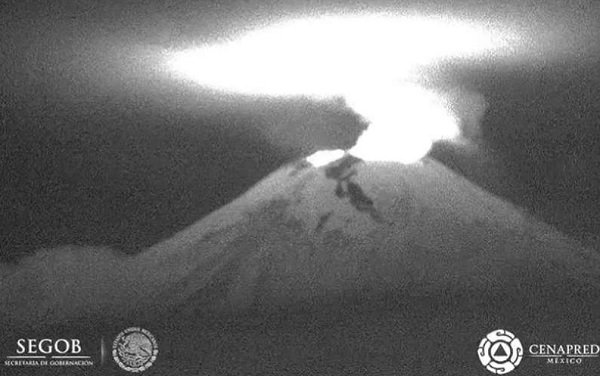