Venezuela has long banked on its oil reserves, but the island is also the home of some of the world’s finest varieties of cocoa beans. Some believe the chocolate industry could help melt the country’s economic troubles away.

More than 700 Venezuelans came together to talk about chocolate at this year’s fifth international chocolate festival. The world’s largest chocolate mosaic was the center of the festival with more than 18 square meters of black and white chocolate, weighing 215 kilograms – forming the word “Venezuela.” And three judges from the Guinness Book of World Records handed the record-breaking title to Venezuela.

“We have the best cocoa in the world, recognized and certified. Now is the time to grow, and to take advantage of that resource that Mother Nature has given us to support the country, to generate foreign incomes, in order to help many people affected by the economic crisis,” Leudys Gonzalez, president of Our Earth Foundation said.

In addition to the Guinness World Record, 120 cacao farmers, and small and medium producers participated in the chocolate fair. They showed their best cocoa creations- insisting Venezuelan cacao is genetically perfect. For other people, the chocolate fair was once-in-a-lifetime opportunity to show off their businesses. 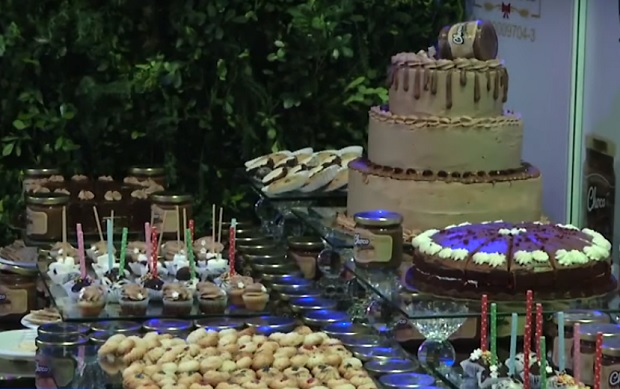 Only about 15 countries in the world are recognized for producing and exporting fine, aromatic cocoa. Venezuela is one of them. Local experts say, that Venezuelan chocolate is genetically unique, grown in special microenvironments. Between 16,000 and 18,000 metric tons of cacao are produced in Venezuela every year, about half is exported, mostly to Europe and Asia.

Venezuelan chocolate brings badly needed jobs to the country’s economy- and is one of the few exports recognized internationally. For many cocoa farmers and chocolatiers, the production and export of Venezuelan chocolate is an essential lifeline in hard economic times.