“If the bees are finished, in a little time the human race would also end,” warn residents of Yucatecan Maya communities.

“It seems like the authorities of both federal and state governments are always at the service of businessmen and they don’t care about the wellbeing of the Maya communities in Yucatán”, expressed one of the activists.

At a press conference, beekeepers and farmers from the community of Dzonot Carretero (Tizimín) reported that recent fumigations have caused massive death of bees (not only European bees, but also those of the Melipona kind), which puts this ancestral practice in danger, as well as their crops and medicinal plants.

Added to this, they indicated that there is excessive felling of trees that causes deforestation and other environmental problems, derived from the agro-industrial activity that instead of benefiting, affects their community. “All this before the null act and complicity of state and federal authorities”.

A number of indignated activists reported that they denounced on September 26, once again, all these affectations to Profepa, Sagarpa, Secretary of Health and the Federal Commission for the Protection of Sanitary Risks. However, they have already gone to these instances before, but to date there is absolutely no response from any of these governmental agencies.

José Uc Ku and Marcelo Cupul Ku, members of that rural community, pointed out that from the 11th to the 22nd of June a series of fumigations were carried out in several ranches owned by Jacob Xacur Eliure, which caused the death of  thousands of bees, as well as plants and crops in the muncipality of Tizimín.

These activists also described with sadness, (and even tears in their eyes), how they have seen their bees die in their own hands. “If the bees are finished, it’s a matter of time for the human race to stop exisiting,” warned Uc Ku.

“We do not want the honey that we produce in an organic way, to be contaminated with all those chemicals they use in fumigation”, he pointed out. 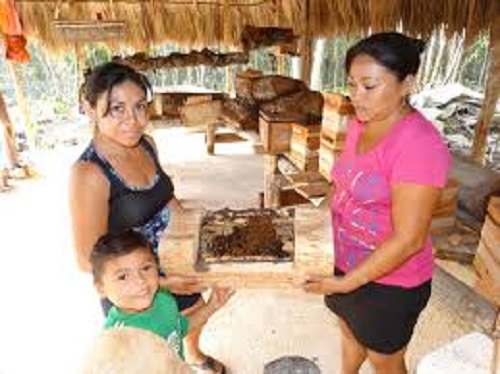 A total of 26 hives were lost, and another 40 were affected with continuous mortality. 108 bee hives were found in 50% mortality. In addition to possible risks to the health of the inhabitants of Dzonot and neighboring police stations. Each hive, they said, is quoted at around 4,000 pesos, which is a significant economic loss for the people of this community.

They demand to investigate and sanction the people responsible for these actions, and take the necessary measures so these practices that affect the community are never repeated.

“Reparation is not only requested, but also absolute respect for the ways of life, subsistence and practices of our rural Maya communities. The State must recognize, value ​​and respect the way communities determine to build their own development model, “said Jorge Fernández Mendiburu, of Movimiento Indignación (indignation movement).

“But what has been seen”, he insisted, “in many of the cases that have been denounced is that “the government is at the service of the business sector and to the detriment of the local peninsular Mayan people.”