Día del Grito to be celebrated in Canada and the US

On September 16, 2018, Mexicans will celebrate the 207th anniversary of their independence. In multiple civic squares throughout the territory, public officials will carry out the famous Cry of Independence on the night of September 15 in memory of the warlords that started a rebellion against the Spanish government in 1810.

Mexicans usually celebrate with traditional music (banda and mariachi), dances, flags, and several dishes such as tamales, quesadillas, pozole, and chiles en nogada. Folklore and festivities are a must during these celebrations.

These festivities will also be celebrated in the United States. The Institute of Mexicans Living Abroad (IME) has created an interactive map for Mexicans living abroad to enjoy a Mexican night in the proximity of their homes.

In the United States alone, there are more than 35 million people of Mexican origin. Most of the Mexico Independence celebrations take place in California, Texas, and New York.

For instance, the General Consulate of Mexico in the city of Dallas, Texas, will host a free concert by the Dallas Symphonic Orchestra today at 19:30 hours at the Morton H. Meyerson Center.

The Mexican Consulate in San Francisco, California will also host a party on September 16, at 19:00 hours, within the San Francisco City Hall. There will be mariachi, folkloric dances, workshops, and food. 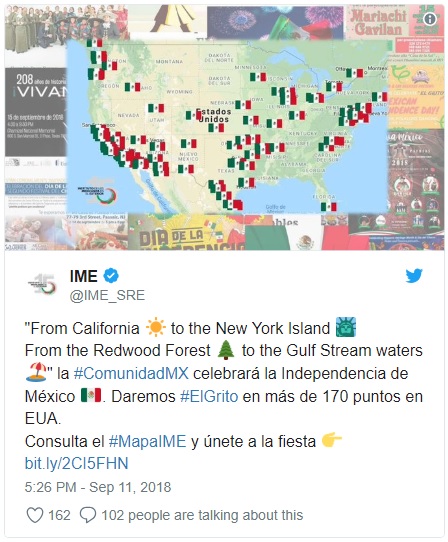