Chiles en nogada is a dish that represents Mexico in its integrity and the symbolic implications of the dish are massive: the green of the parsley, the white of the nogada, and the red pomegranate seeds represent the colors of our country’s flag, patriotic colors rendered to the fortunate guest to the Independence feast.

Ricardo Muñoz Zurita has devoted his life to Mexican food. He is one of Mexico’s most renowned chefs in the country, with several restaurants under the brand Azul in Mexico City. Proclaimed a “Prophet and Preserver of a culinary tradition” by Time Magazine in 2011, Muñoz Zurita has written 10 books on Mexican cuisine focusing on the country’s culinary tradition. His greatest work is perhaps the Diccionario Enciclopédico de la Gastronomía Mexicana (Encyclopedic Dictionary of Mexican Gastronomy), a text that portrays 22 years of research and that aims to codify each and every ingredient and culinary techniques in the wide Mexican cuisine sphere. He is a chef, writer, and researcher devoted to the preservation of Mexican cuisine.

In his book Stuffed Chiles of Mexico. An Anthology of Recipes (Los Chiles Rellenos en México. Antología de Recetas), a book edited in both Spanish and English, Muñoz Zurita writes about the main character of his book: “Chile (pepper) is the heart and soul of Mexican food, and as I would say in my own language, is the beginning and end of Mexican food.” Chile is an ingredient that determines taste in Mexican cuisine plenty of times.

Muñoz Zurita shares the relevance of chile and the purpose of his book: “the topic of stuffed chiles constitutes one of the most important chapters of the history of Mexican cuisine. Because Mexicans when we speak the truth, we speak ‘al chile’ and because finally, the chile relleno (stuffed chile) is one of the most sophisticated preparations in the art of cookery in general.”

Chiles en nogada are in the spotlight every September 15 ready to play the main role in the Mexico Independence feast. 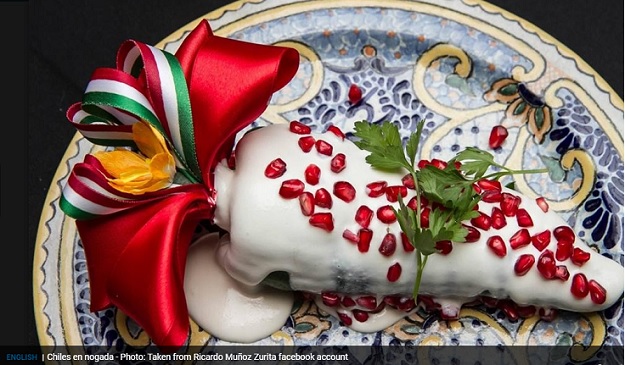 Poblano peppers filled with a mixture containing meat, fruits, and spices topped with a walnut-based cream sauce know as nogada, pomegranate seeds, and parsley, are the stuffed chiles that probably enjoy of the greatest prestige in Mexican cuisine.

Chiles en nogada is a dish that represents Mexico in its integrity and the symbolic implications of the dish are massive: the green of the parsley, the white of the nogada, and the red pomegranate seeds represent the colors of our country’s flag, patriotic colors rendered to the fortunate guest to the Independence feast.

Muñoz Zurita research shows, chiles en nogada first appeared in history with the confirmation of Independence of the Mexico Republic on August 28, 1821. Mexico Army General, Agustín de Iturbide was visiting Puebla, after signing the Threaty of Córdoba (a treaty that established Mexican independence from Spain at the conclusion of Mexico’s Independence War) with Juan O’Donojú, then Viceroy of New Spain, and as part of the celebrations of independence and coinciding with the feast day of San Agustín a banquet was offered.A series of dishes were prepared, but the creation of the nuns from the Convent of Santa Mónica, Puebla were such a delicacy that Iturbide could not resist but to taste the appealing dish, even though he was afraid of being poisoned by fanatics to the Spanish hegemony.

This is the foundational myth of the chiles en nogada, however, Muñoz Zurita found that according to historian Guadalupe Pérez San Vicente, the recipe could be traced back to the eighteenth century in the recipe book La tipica cocina poblana y los guisos de sus religiosas ( Traditional cuisine from Puebla and the dishes of its nuns) by Salazar Monroy.

“Those who cook know of the laborious nature of its preparation, and those who only eat, both appreciate its unrivalled flavour and presentation”, concludes Muñoz Zurita.