According to VOX, Venezuelan President Nicolas Maduro survived an alleged assassination attempt via drone on Saturday when a flying device carrying explosives detonated during a speech he was delivering in Caracas. Maduro, an unpopular leader who has presided over one of the worst economic collapses in Latin America in recent history, blamed the “far right,” including Colombian President Juan Manuel Santos, for the attack.

Here’s what happened: Maduro on Saturday evening was addressing the crowd at a military parade celebrating the 81st anniversary of the National Guard when a flying device approached and exploded, according to Venezuelan officials.

Footage of the event, which was broadcast on live television, shows Maduro look up mid-speech, while his wife Cecilia Flores, who is standing behind him, flinches. For a few seconds, no one appears to react, as they seem to be processing what’s happened. “Seconds later, there was a second explosion,” Maduro said in a national address recounting the incident. Then, the crowd disperses and people flee. 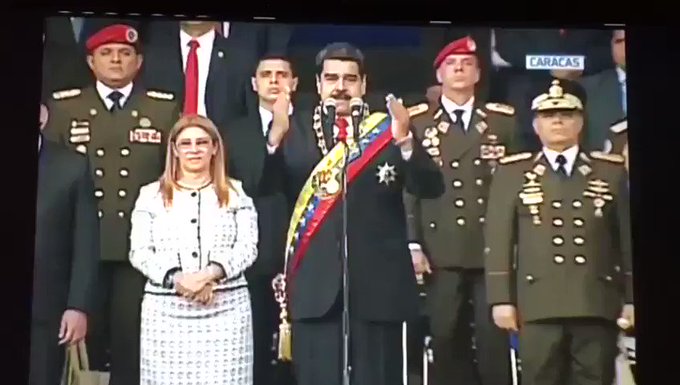 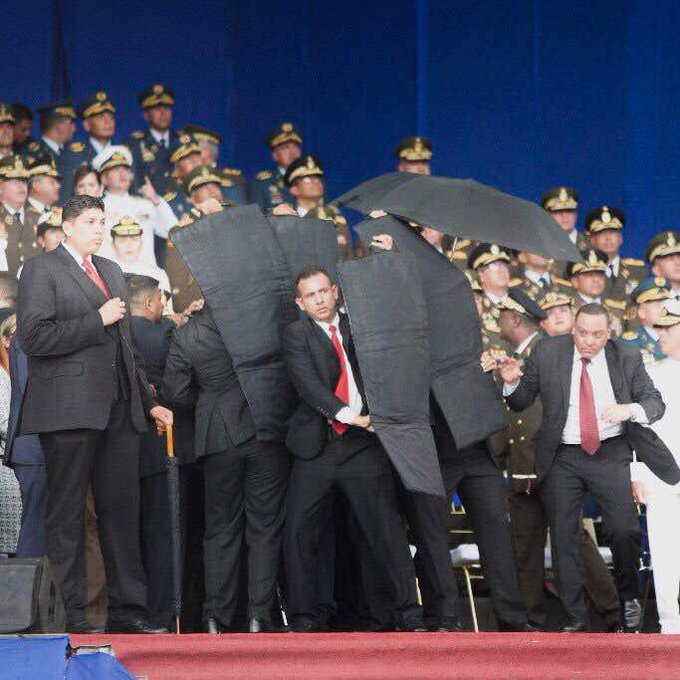 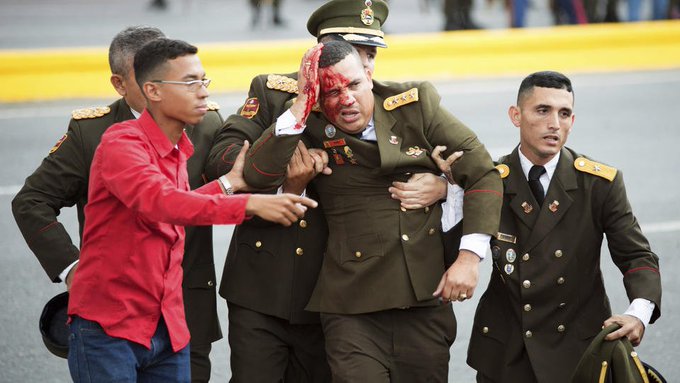 Seven members of the National Guard were harmed in the attack, Information Minister Jorge Rodriguez said at a press conference after the incident. He added that Maduro was unharmed and in a “perfect state of health.”

“This was an attempt to kill me,” Maduro later said in a retelling of what happened. “Today they attempted to assassinate me.”

Firefighters at the scene disputed that account, however, telling the AP a gas tank had exploded nearby.

Maduro, 55, said he believed the attempted attack was part of a right-wing plot against him that was working with opponents in Bogota and Miami, including Santos, the outgoing Colombian president. He provided no evidence to back up his accusations. The Colombian government called Maduro’s charges “absurd.”

Other countries expressed support for Maduro after the attack, including Turkey, Syria, Nicaragua, and Russia. Bolivian President Evo Morales in a series of tweets expressed solidarity with Maduro and described the attempt as a “crime against humanity.”

A little-known group called Soldiers in T-shirts claimed responsibility for the act, saying they planned to fly two drones at the president, but the devices were shot down. The AP couldn’t verify the claims, and the group didn’t respond to a message from the outlet when it reached out for comment.

National Security Adviser John Bolton said in an appearance on Fox News Sunday that the United States had “no involvement” in the incident. “If the government of Venezuela has hard information that they want to present to us that would show a potential violation of US criminal law, we’ll take a serious look at it, but in the meantime I think what we really should focus on is the corruption and oppression in the Maduro regime in Venezuela,” he said.

The political situation in Venezuela is bad

Maduro, a former bus driver who took over as president after former President Hugo Chavez died in 2013, has overseen a catastrophic economic collapse in Venezuela.

The socialist economy, once thriving, has spiraled since global oil prices dropped in 2014. Venezuelans suffer from widespread food and medicine shortages, and the majority of the country is living in poverty. Seventy-five percent of the country’s population lost an average of 19 pounds of bodyweight between 2015 and 2016, and the International Monetary Fund expects inflation in Venezuela to reach 13,000 percent in 2018. Thousands of Venezuelansare fleeing the country.

And yet, Maduro remains in power. He won reelection in May due to a largely rigged election. He banned two of the most popular opposition leaders, Leopoldo Lopez and Henrique Capriles, from running against him, and implied that any Venezuelans who didn’t vote for him could lose government food subsidies.

His election is likely to worsen the economic crisis in Venezuela: Instead of electing a reformer who might enact the measures necessary to pull the country out of the state it’s in right now — reforms such as addressing its currency exchange policy and diversifying the economy away from oil dependence — the country now has Maduro for another six years. And he remains defiant — in the face of opposition, or alleged assassination attempts.