The lowest denomination of Mexican currency is the diez-centavos coin, a very small silver coin that is rarely used. But for the Bank of México (Banxico) it’s a costly coin to make. Rising costs have pushed up the price of minting a single one of the coins to 19 centavos.

That’s up from nine centavos in 2012. The central bank’s production costs have risen 40%, even after opting for cheaper minting processes. 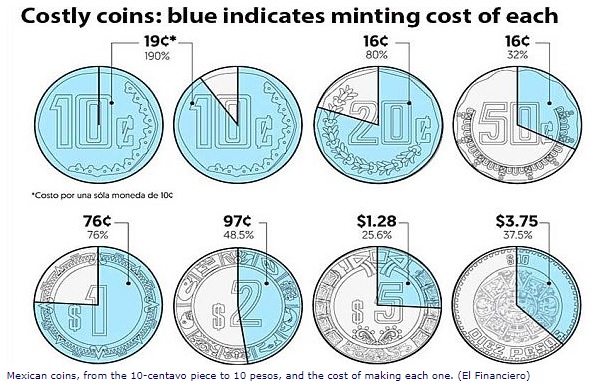 Miguel Ibarra, a financial studies expert at the National Autonomous University (UNAM), explained that coin production costs depend on factors such as metal prices, production of the coin dies, distribution and salaries. The cost of low-denomination coins has led many countries to phase them out, he said.

But if Banxico were to stop producing the 10-centavo coins, prices would instantly rise due to rounding up: if something has a price of 10.60 pesos but there are no 10 or 20-centavo coins, the price would automatically be rounded up to 11 pesos, he said.

Less expensive to produce are 20-centavo coins, which now cost 16 centavos, and the 50-centavo denomination, whose cost is 16 centavos.