On a day like today, 77 years ago, Saint Maximilian Maria Kolbe died a martyr on a 14th of August of the year 1941. He was a Polish Conventual Franciscan friar who volunteered to die in the place of a Jewish man in the Nazi death camp of Auschwitz, located in German-occupied Poland during World War II.

Maximilian was active in promoting the veneration of the Immaculate Virgin Mary, founding and supervising the monastery of Niepokalanów near Warsaw, operating an amateur radio station (SP3RN), and founding or running several other organizations and publications.

After the outbreak of World War II, which started with the invasion of Poland by Germany, Kolbe was one of the few brothers who remained in the monastery, where he organized a temporary hospital. After the town was captured by the Germans, he was briefly arrested by them on 19 September 1939 but released on 8 December. He refused to sign the Deutsche Volksliste, which would have given him rights similar to those of German citizens in exchange for recognizing his German ancestry.

Upon his release he continued work at his friary, where he and other friars provided shelter to Polish refugees, including 2,000 Jews whom he hid from German persecution in their friary in Niepokalanów.

Maximilian Kolbe ended up in Auschwitz as prisoner 16670. 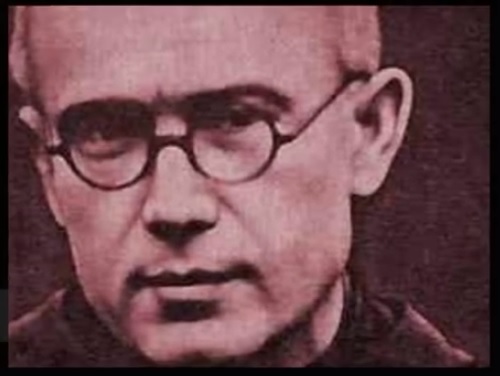 When a German deputy camp commander, picked up 10 men to be starved to death in an underground bunker to deter further escape attempts, one of the selected men, Franciszek Gajowniczek, cried out, “My wife! My children!”, and at that moment, Maximilian Kolbe volunteered to take his place.

According to an eye witness, Maximilian Kolbe led the prisoners in prayer to the Virgin Mary. Each time the guards checked on him, he was standing or kneeling in the middle of the cell and looking calm. After two weeks of dehydration and starvation, only Kolbe remained alive.

Finally, the Nazis gave him a lethal injection of carbolic acid. Kolbe is said to have raised his left arm and calmly waited for the deadly injection. He died on August 14. His remains were cremated on 15 August, the feast day of the Assumption of Mary.

Kolbe was canonized on 10 October 1982 by Pope John Paul II, and declared a Martyr of charity (canonization is the act by which the Catholic church declares that a person who has died was a saint).

He is the patron saint of amateur radio operators, drug addicts, political prisoners, families, journalists, prisoners, and the pro-life movement. John Paul II declared him “The Patron Saint of Our Difficult Century”.

After his canonization, St. Maximilian Kolbe’s feast day was added to the General Roman Calendar. He is one of ten 20th-century martyrs who are depicted in statues above the Great West Door of Westminster Abbey, London.

TYT Newsroom with information from Catholic.org