Mexico, Aug. 20 (Notimex).- President Enrique Peña Nieto and president- elect Andrés Manuel López Obrador began the process of transition of the Federal Public Administration and the rapprochement between both teams.

In a joint message at the National Palace after leading a private meeting of the transition teams, Peña Nieto said that for the good of Mexico an orderly process is being sought.

López Obrador welcomed the institutional and respectful transition, and thanked President Peña Nieto for the gesture of joint coordination.

President Enrique Peña Nieto said that he will provide all the information to the incoming administration so that he can make the decisions and definitions of government public policies, which he said will be respectful as of December 1.

In a joint press conference, he said there was a dialogue in a climate of respect and cordiality about the transition process to make it very efficient, and he recalled that a meeting like this had never happened in the recent past.

“Without doubt this is an unprecedented meeting since it had not happened in the recent past, to have at this stage of the transition already defined who will be the holders of the governmental dependencies of the Federal Public Administration,” he said.

“The reason for this meeting is precisely to formally initiate this process of transition and rapprochement between the two teams,” he said.

“I want to leave here record of recognition to the president-elect of our country for the openness, for the disposition, for the interest he has had in knowing issues of the Federal Public Administration and evidently this government will be absolutely respectful of the definitions and decisions that are taken from December 1,” he said. 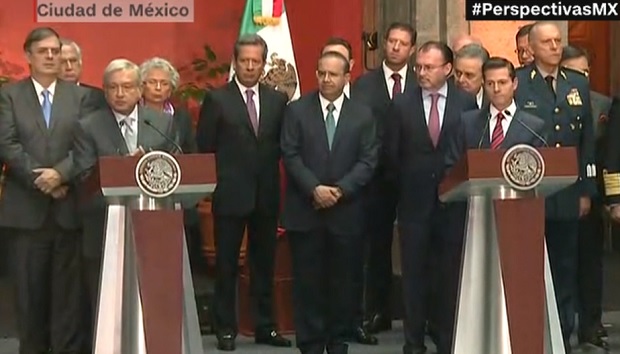 López Obrador said that “it is an institutional transition because it emerges from a democratic electoral process, the mandate of our people is being fulfilled.”

“We have received the unconditional support of the constitutional president Enrique Peña Nieto, we also, in correspondence, have reaffirmed our decision to respect the current government until the last day of his term,” he said.

“We should bear in mind that, for example, the budget will be prepared for next year and this requires joint work, and in other cases too,” he added.

“We are very satisfied and sincerely we thank President Enrique Peña Nieto and his team, the current cabinet, for this institutional gesture of respect and joint collaboration,” he added.