Hipil, a combination of photography and embroidery featuring the daily life of Maya women

The exhibition Yucatán en hilos, by Mexican artist Alejandra Díaz Mariscal, opened at the Satellite Civic Center of Mexico City on August 15 at 6 pm; afterwards, it will be moved to Argentina as part of the fourth Biennial of Contemporary Art and finally the exhibition will be in display in Texas, USA.

The 21 pieces that are part of the sample will are exhibited in a rack featuring henequen thread from Hacienda Sotuta de Peón, where it is still produced. These are photographs sublimated in cloth and intervened with embroidery, which highlight different image of the hipil used by Yucatecan women framed in everyday life: in their workplace, on the street, at the park or at home. 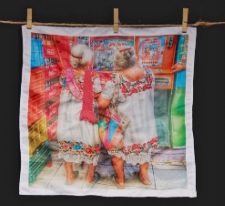 Alejandra said: “The hipil is not the kind of garment used for parties or special moments, but clothing used daily and without distinction of classes. This outfit is indeed a way of life for the women in Yucatán, and my absolute inspiration is the senior Yucatecan mestiza, because they are a vulnerable sector that continues to maintain their traditions with pride”.

Her idea emerged from a photograph where the hipiles appear on a clothesline. 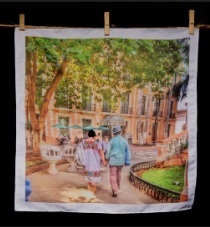 “No photograph is prepared. All are real scenes, the only intervention is in post-production and in the threads that always highlight the typical costume, hair, and sometimes other details such as earrings or necklaces”.

His photographs, he says, also have a particular style, as they are colorful and saturated, blurred in some parts, in some cases featuring tiny and very detailed interventions.

The photos were taken at Dzibilchaltún, Izamal, Sotuta de Peón, Maní and of course Mérida during the last six years. The photos will be exposed publicly for the first time in Mexico City.

The artist says that when she started the combination of photography and embroidery she showed it to her friend Elena Martínez Bolio, who is also a multidisciplinary artist and embroiderer, and it seemed to her that the idea had potential. 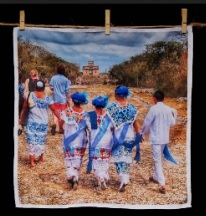 Her work can be found as Diva Vida on Instagram and Facebook, or with her personal name.

TYT Newsroom with information from  lajornadamaya.mx