According to CNBC News, the avocado on your toast may soon fly in on Southwest Airlines.

The low-cost carrier expanded its air cargo business to Mexico over the weekend, its cargo business’s first international destination.

The expansion is an an effort to fly fruits, vegetables and pharmaceuticals, and a host of other goods between the U.S. and its third-biggest trade partner. The program started service Sunday between Houston and Mexico City and will expand to other cities, including Cancun and Puerto Vallarta later this summer. Mexico is the biggest source of imported fruits and vegetables to the U.S., according to the U.S. Department of Agriculture.

Air cargo is a tiny but growing part of U.S. airlines’ overall revenue, thanks to e-commerce and picky eaters who want more fresh food. Southwest made $173 million from it last year, less than 1 percent of its overall revenue.

Large U.S. airlines, unlike some foreign carriers, don’t operate a dedicated freighter aircraft. Instead they fill up passenger planes’ bellies with cargo. Freight demand in North America is growing faster than the global average, according to the International Air Transport Association, a industry group that represents most of the world’s airlines. 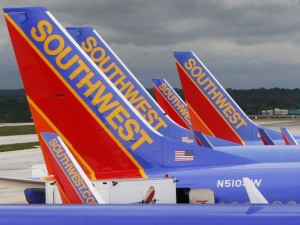 Southwest operates a fleet of all Boeing 737s and other airlines have much bigger aircraft with more space below the passenger cabin. But the airline hopes the structure of its network will entice shippers to select the carrier. Southwest, which carries more passengers within the U.S. than any other airline, so-called point-to-point flights that often require a stop in a big-city hub, said spokesman Dan Landon.

Other products that might find their way on board include fresh-cut flowers and U.S.-made pharmaceuticals said Southwest spokesman Dan Landon.