According to telesurtv.net, the government of Mexico City has granted Intangible Cultural Heritage status to Lucha Libre (pro wrestling), a sport and performance art that has become a colorful tradition in the country.

The decree was signed by Jose Ramon Amieva, who bacame mayor of the city after Miguel Angel Macera’s resignation, and the professional wrestler and President of the Lucha Libre Commission of Mexico City ‘El Hijo del Fantasma’ (The Son of the Ghost) in a ceremony on Saturday July 22.

“This is an achievement for the government, being able to recognize that Lucha Libre is present in our lives, that women and men that take part in this culture must be recognized,” said Amieva.

The status was granted by the culture secretary after a petition by the Wrestler’s Commission of Mexico City, where the tradition thrives. The city currently has two Lucha Libre sanctuaries: the Arena Mexico and the Arena Coliseo, both famous nationwide.

Amieva said the culture minister will work with El Hijo del Fantasma to build a wrestlers’ database in order to include them in social welfare programs; health and employment opportunities, and new tourism projects.

The declaration was applied using the international standards on intangible heritage set forth by UNESCO, which includes established “customs, representations, expressions, knowledge and techniques – along with instruments, objects, artifacts and cultural spaces inherent to it – that communities, groups and in some cases individuals recognize as an integral part of their cultural heritage,” said Amieva. 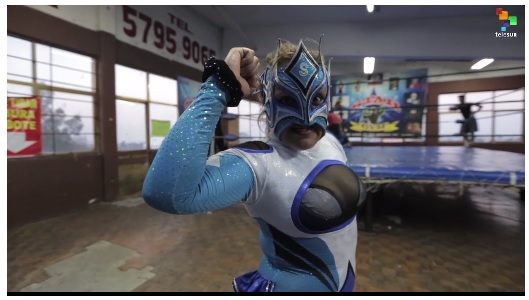 During the ceremony at the Old City Council, attendees mingled with Mexican political personalities, along with celebrated wrestlers ‘La Parca’ (The Reaper), ‘El Vampiro Canadiense’ (The Canadian Vampire) and ‘El Acertijo’ (The Riddle).

The official declaration was followed by a Lucha Libre show and a concert at Mexico’s biggest square, El Zocalo.

Lucha Libre didn’t originate in Mexico. In 1863, Enrique Ugartechea, the first Mexican wrestler, invented Mexico’s Lucha Libre based on Greco-Roman wrestling. It was then adopted by classic characters such as the legendary El Santo and Blue Demon, who starred in several films and enjoyed celebrity status.