Andres Manuel Lopez Obrador was elected as Mexico’s first left-wing president in recent times, riding a public revolt against rampant crime, corruption and poverty and handing a crushing defeat to the business-friendly parties who’ve run the country for decades. The peso dropped.

The earliest figures announced by the electoral board gave Lopez Obrador 53 percent of the vote. Ricardo Anaya, leader of a right-left coalition, had about 22 percent and Jose Antonio Meade, the candidate of the incumbent PRI party, took 16 percent.

Long before those official results began to emerge, exit polls had showed Lopez Obrador so far ahead of his two main rivals that they conceded defeat — and congratulations had begun to pour in from foreign leaders, including Donald Trump. “I look very much forward to working with him,” the U.S. president, who’s repeatedly lambasted Mexico for sending illegal migrants and drugs across the border, said on Twitter.

In a televised address later on Sunday, Lopez Obrador promised “deep changes” and said that while he’ll respect all Mexicans, “we’ll give preference to the poorest, and to the forgotten.” But he made a point of allaying market concerns too, promising to respect the central bank’s autonomy, avoid raising taxes in real terms, and stay within “legal channels” as he reviews oil deals approved under the outgoing president, Enrique Peña Nieto. 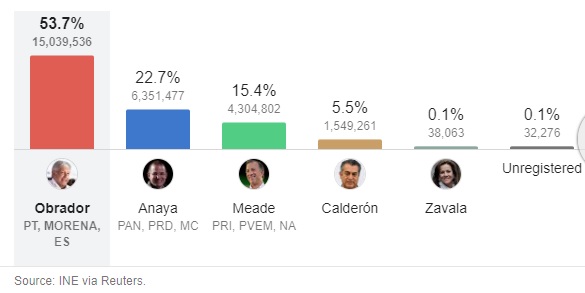 Defeated in the last two presidential votes, Lopez Obrador now has a mandate unmatched by recent Mexican leaders to take the country in a new direction. He’s promised to govern as a pragmatist and says he won’t nationalize companies, or quit Nafta. Still, his procession toward victory has alarmed many investors and business leaders.