The Cuban Parliament approved Sunday July 22nd, the bill to reform the current Constitution, which will introduce the recognition of private property, the role of the market in the socialist economy, and opens the doors to same-sex marriage.

The 1976 Constitution only recognized state property and the agricultural cooperative, in addition to the ownership of housing and other assets, while now the new article will include “other forms of property such as cooperatives, mixed ownership and private property.”

The new text eliminates the goal of working for the “advance towards the communist society”, a topic that generated controversies among some deputies who considered that suppressing the text was losing the essence.

“This does not mean that we renounce our ideas, only that in our vision we think of a socialist, sovereign, independent, prosperous and sustainable country,” said Esteban Lazo, president of the National Assembly.

Lazo recalled that the context was different when the Constitution was approved in 1976, and “the world lived other situations.” In the 1990s there was “the destruction of the socialist camp and all the rest we already know”, in reference to the economic crisis that the country experienced as the “Special Period”. 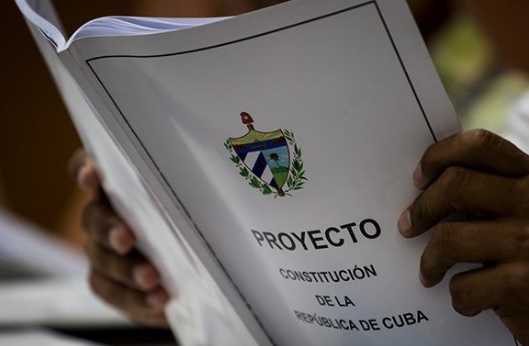 The new constitutional text was approved unanimously in an ordinary session of the National Assembly. The project will now go into popular discussion from August 13 to November 15. Finally, a national referendum will be held before its final approval.

It lays the foundations to integrate different economic actors, recognizing the role of the market in the socialist economy of the island, foreign investment and new forms of property, including private.

It also removes from its constitutional text the part that alludes to the “communist society” as an end.

The new Carta Magna will establish the formula of President of the Republic (current president of the Council of State and Ministers), and the vice president. Restores the position of prime minister.

In addition, unlike the current Constitution, which dates from 1976, the project defines marriage as the union between two people, without specifying sex, legally paving the way for gay marriage, an important demand of the LGBT community.