Guatemala’s Volcan de Fuego — Volcano of Fire — erupted spectacularly Sunday, shooting a plume of ash and gas nearly six miles into the sky and spreading ash and debris across towns and farms more than 10 miles away from the volcano.

A river of lava, rocks and ash poured down the mountain, burying homes and people. This river, or pyroclastic flow, may not be glowing orange like molten earth, but it is undeniably the most deadly part of the volcano.

Rescuers on Monday June 4, pulled at least 10 people alive from ash drifts and mud flows that poured down the slopes of Guatemala’s erupting Volcano of Fire, but officials said at least 33 people were dead and the toll was expected to rise.

The head of the country’s disaster agency, Sergio Cabanas, gave the updated death toll, but said rescuers using helicopters had pulled 10 people from areas swept over by a towering cloud of thick ash, mud or lava.

What is Pyroclastic flow? 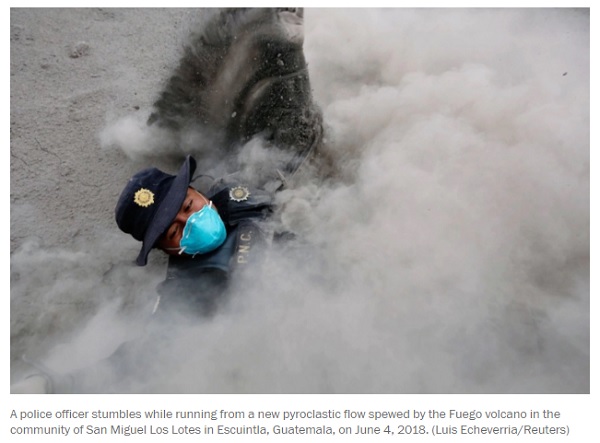 Residents of El Rodeo, about 8 miles (12 kilometers) downslope from the crater, said they were caught unaware by fast-moving pyroclastic flows when the volcano west of Guatemala City exploded Sunday, sending towering clouds of ash miles into the air.

Searing flows of ash mixed with water and debris down its flanks, blocking roads and burning homes.

The charred landscape left behind was still too hot to touch or even to pull bodies from in many parts, melting the shoes of rescuers. Workers told of finding bodies so thickly coated with ash they appeared to be statues. Inhaling ash or hot volcanic gases can asphyxiate people quickly.

More than 3,100 people have been evacuated while search and rescue efforts continue into the night, said Sergio García Cabañas, director of the disaster agency. The explosion will affect 1.7 million people.

Authorities urged residents living near the volcano to evacuate immediately, and warned some in Chimaltenango, Sacatepequez and Escuintla states to watch out for volcanic rocks and ash.

“All our solidarity and support to the President Jimmy Morales and the Guatemalan people for the loss of human life after the eruption of the volcano of Fire.”

The following footage broadcasted by Canal 3 Guatemala is explicit, viewer’s discretion is advised: