According to The Huffington Post, Nathan Larson, a 37-year-old accountant from Charlottesville, Virginia, who is running for Congress as an independent candidate in his native state, is also a pedophile, as he admitted to HuffPost on Thursday May 31. Larson has also bragged in website posts about raping his late ex-wife.

In a phone call, the candidate confirmed that he created the now-defunct websites suiped.org and incelocalypse.today ― chat rooms that served as gathering places for pedophiles and violence-minded misogynists like himself. HuffPost contacted Larson after confirming that his campaign website shared an IP address with these forums, among others. His sites were terminated by their domain host on Tuesday May 29.

On the phone, he was open about his pedophilia and seemingly unfazed about his long odds of attaining government office.

“A lot of people are tired of political correctness and being constrained by it,” he said. “People prefer when there’s an outsider who doesn’t have anything to lose and is willing to say what’s on a lot of people’s minds.” 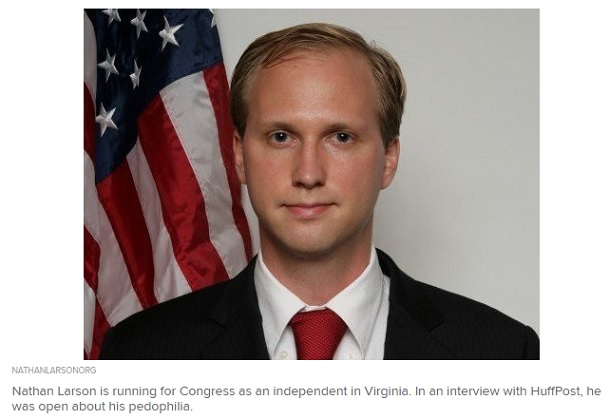 When asked whether he’s a pedophile or just writes about pedophilia, he said, “It’s a mix of both. When people go over the top there’s a grain of truth to what they say.”

Asked whether there was a “grain of truth” in his essay about father-daughter incest and another about raping his ex-wife repeatedly, he said yes, offering that plenty of women have rape fantasies.