Among the bilateral agreements reached between Yucatan’s Ministries of Urban Development and Environment, and the Departments of Energy and Climate Change of California, stands out the exploration of mechanisms to finance projects aimed towards the preservation of the Mayan Jungle through the carbon market of California.

Yucatán Governor, Rolando Zapata, and California Governor, Jerry Brown, met prior to the annual meeting of the Governor’s Climate & Forest Task Force (GCF Task Force) to be held this September, together with the Climate Action Summit.

The Governors agreed this was an opportunity to strengthen global actions for the preservation of tropical forests, which have the potential of countering the emission of four gigatons of greenhouse gases.

The Government of Yucatán committed to providing a seed capital of USD$ 200,000 to create the Fund for Research on Climate Change in Tropical Regions to facilitate the transfer of information between the member Governments of the Under2 MOU coalition – a subnational global climate leadership who has the shared goal of limiting greenhouse gas emissions.

Similarly, both states agreed to devise a protocol for the production or organic agri-food and develop more strategies to accelerate a transition to a management neutral in greenhouse gases emission to reduce the environmental footprint of public offices and buildings.

Governor Zapata stated the fifth part of Yucatán is under protection, given that almost an 80% of Yucatán is covered in forests and jungles, in addition that this state has the most important underwater reserves of drinking water in Mexico.

For his part, Governor Brown highlighted the importance of what Yucatán has achieved in renewable energy and the conservation of the Mayan Jungle, making a call to continue the fight against climate change.

“Cooperation Yucatán-California on environmental matters. A special fund to tackle climate change,” reads the tweet of the Yucatán Government: 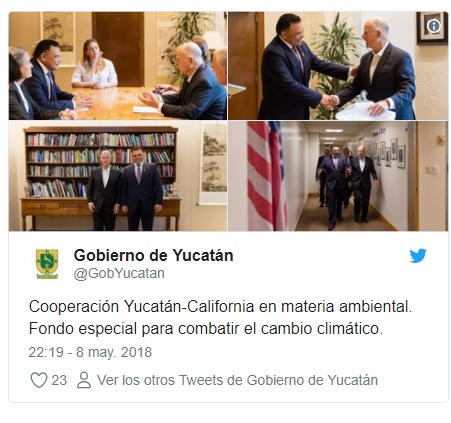