Yucatan is the only state in Mexico with “zero” kidnappings: State Attorney’s Office of Justice

According to Noemi Mena Tello, head of the Specialized Unit in the Fight against Kidnapping and Search of Persons of the State Attorney General’s Office, in the whole state of Yucatan there are absolutely no cases of forced dissapearances, but there are a few cases of people that leave voluntarily and their whereabouts are unknown.

The official said that most of the cases of disappearances are from alcoholic people whose relatives submit complaints to see if they can be located, since they have lost contact with them.

“Another similar situation is when the fishermen fall into the sea and their bodies do not appear, or when the relatives of the migrants to the United States do not hear from them in a long time. In both cases, the complaints are filed because families have to wait for a legal term of five years to declare a person dead and be able to carry out proceedings before other civil authorities to put documents and goods in order”, she said.

In the last five years, there have been two forced disappearances in Yucatan. The first was on May 21, 2013 and it was the kidnapping of Diego M. S, 22 years old, who attended a party in a building in the neighborhood of Bacalar,  Valladolid, where he met a blonde tattooed girl, who turned out to be María Fernand (aka “Saraí”), who was used as “hook”by an alleged criminal group, and with whom he was last seen on Wednesday May 22 on board the young man’s Nissan Altima, who was a student of Gastronomy at Universidad Modelo.

As soon as they advanced a few blocks, they were intercepted by three subjects, who subdued Diego and took him to a safe house on Calle 14 (between 19 and 21), of the San Isidro neighborhood where they kept him kidnapped.

The kidnappers called the parents of the young man to ask for a ransom of 3 million pesos, since the young man is the son of businessman Alberto Mena Sánchez, owner of the jewelry store “Yeraldine”, in Valladolid. However, Diego Mena was able to escape from his captors and ask for help from local authorities.

The suspects were finally arrested in Cancun, as they belonged to a gang of kidnappers who operated in the state of Quintana Roo.

The other case happened at approximately 8 pm on March 16, 2016, when two teenagers, A.C.A. and R.V.G. intercepted their victim, Margarita O.J., 70 years old, outside of the “Life” casino in Plaza Galerias, in the north of Mérida; in her own vehicle, the highschool kids drove the victim around for two hours through the streets of Mérida, during which time they gagged her, covered her eyes with tape and handcuffed her.

Then, the kidnappers took their victim to the “Recinto Real” Motel, located at km 28 of the Periférico, where they threatened to kill her if her family did not cooperate, asking for ransom money.

The arrest of the young men took place in different places, since one of them was arrested when he tried to flee from the place where the victim was being held, and the other one was caught in a local medical clinic in this city. 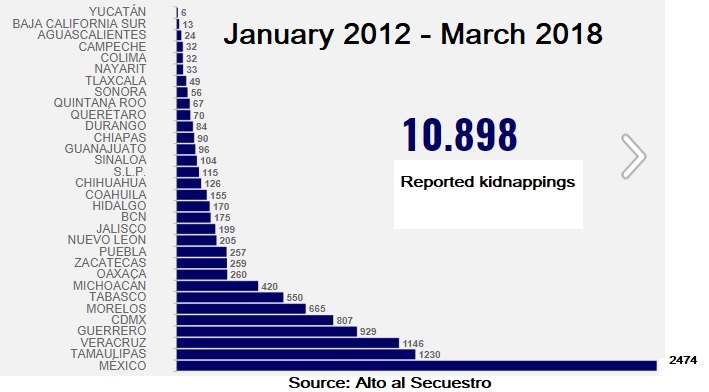 If the global figure is divided between each day, the result is absolutely horrifying: Mexico accounts for 170 kidnappings every month, which means 40 kidnappings per week, and 6 a day.