Mexico City – Washington’s ambassador to Mexico left the country on Saturday May 5, for retirement after a 30-year career with the State Department, ending a two-year stint in the post during a time of tricky relations between the two countries.

The U.S. Embassy said in a statement that Roberta Jacobson and her husband departed Mexico on a commercial flight to the United States.

“Representing the #USA in Mexico was the job of my life. Thank you to this beautiful country and its people. I predict a prosperous future for Mexico,” Jacobson tweeted in Spanish. “Today, I believe even more in the strength of the Mexico-U.S. relationship.”

Ms. Jacobson, who announced her retirement in March, previously served in a number of posts focused on the Americas, including assistant secretary of state for Western Hemisphere affairs.

She was sworn in as the United States’ first female ambassador to Mexico on May 5, 2016, following a nearly year-long delay in her Senate confirmation due to her role in representing the Obama administration in negotiations on restoring diplomatic with Cuba. 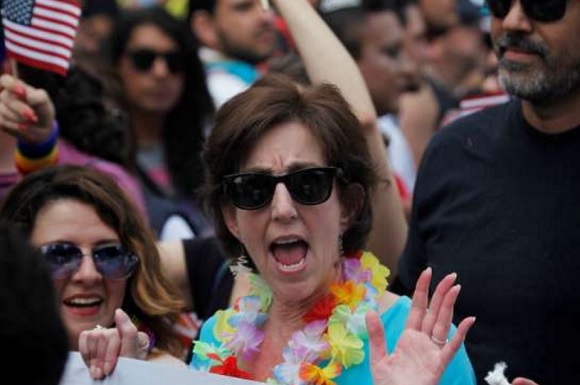 During her tenure in Mexico, relations with the United States were often tense amid President Donald Trump’s tough stance on migration and trade and his vows to build a border wall and force Mexico to pay for it, something that President Enrique Peña Nieto’s government has forcefully rejected.

However, the ambassador was seen as well-liked by Mexicans, and observers credit her with steering clear of the noise coming from both sides and quietly focusing on what could be achieved in the bilateral relationship.

Jacobson was also known for speaking out on issues close to her, such as violence against women and killings of journalists in the country.

She marched twice in Mexico City’s Pride Parade, and last September accompanied U.S. rescuers who came to the capital to assist in searching for victims of a deadly earthquake.

The U.S. Embassy posted a video montage on YouTube showing Jacobson traveling around Mexico with family, trying on a lucha libre wrestling mask, speaking with young Mexicans, posing with actor Diego Luna, and breaking ground on a nearly $1 billion embassy complex under construction.

“My time in Mexico was brief,” she acknowledged in the video, promising to return as soon as possible: “This is not a goodbye, but rather until the next time.”