HERMOSILLO, Sonora .- On May 13 around 2:00 pm (16:00, Mexico City time), in the Wings restaurant inside the Hermosillo International Airport “General Ignacio Pesqueira” a man, who had stolen a knife from the restaurant’s kitchen, threatened the customers and then committed suicide inside a bathroom in this air terminal.

According to information from the Mexican newspaper Excelsior, an armed confrontation was reported at first, but this version was immediately discarded by the Public Security authorities who reported that Federal Police officers could not dissuade the suspect, who finally managed to take his own life.

Federal Police agents on duty at the Airport informed that a customer entered the kitchen area inside “Wings” restaurant, took a large knife threatening other customers at the restaurant, then left the establishment and entered the bathroom where he injured himself with the knife when he saw the police officers going after him.

“Federal Police personnel made a detonation to intimidate the subject, and immediately asked for Red Cross support in the place” dictates a preliminary report.

The suspect died when as he was receiving medical attention, as the self inflicted wounds were too harmful.

Other version on the news website 24 Horas, says that the attacker was cornered by agents of the Federal Police inside the bathroom, and when he tried to attack one of the officers, he was shot down. 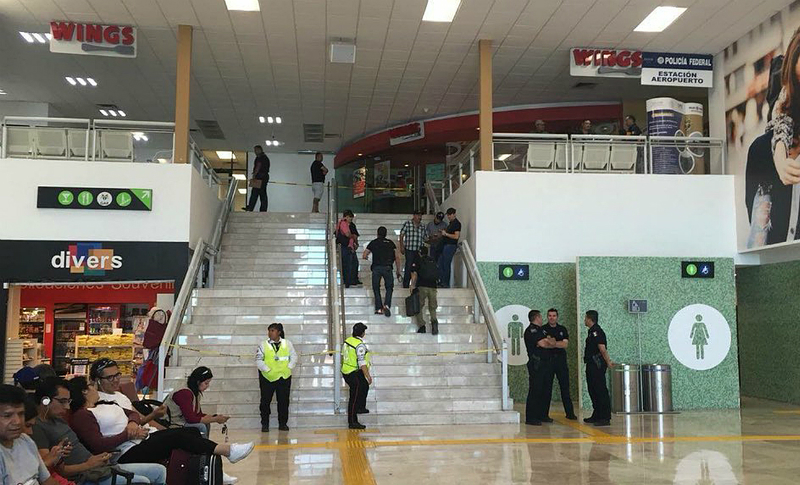 The place was full of uniformed men, members of the Mexican Army, Municipal, State and Federal police officers arrived on site, cordoned off the area, while experts from the Ministerial Agency for Criminal Investigation raised evidence at the crime scene.

The identity of the man has not been revealed by local authorities.