Trump supports the US, Mexico and Canada to organize the 2026 World Cup

Donald Trump, president of the United States, promoted the joint proposal of the U.S, Mexico and Canada to host the 2026 World Cup, the highest soccer competition on the planet.

The official announcement by the three North American countries was made on April 2017. It was announced on a press conference at the One World Observatory of the World Trade Center in New York.

“The United States has created a STRONG offer with Canada and Mexico to organize the 2026 World Cup. It would be a shame if the countries we always support lobbied against the US proposal, why should we support these countries when they do not support us (even in the United Nations)?” 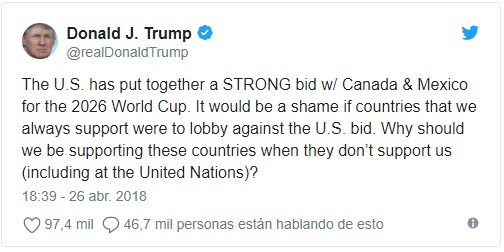 Then, Enrique Peña Nieto, president of Mexico, responded on Twitter to Trump’s message and highlighted soccer as a unifying factor. “We can have differences but football unites us, together we support the candidacy of Mexico, Canada and the United States of America as hosts of the 2026 World Cup,” Peña Nieto tweeted on Wednesday April 25th, 2018.

In that sense, Justin Trudeau, Prime Minister of Canada, joined his colleagues from the United States and Mexico in supporting the joint bid. In two tweets, one in English and one in French, he greeted the project. “Canada fully supports North America’s bid for the FIFA World Cup in 2026, and we are ready to welcome the world to an incredible tournament, it’s great to be associated with @EPN and @RealDonaldTrump on this,” Trudeau tweeted. 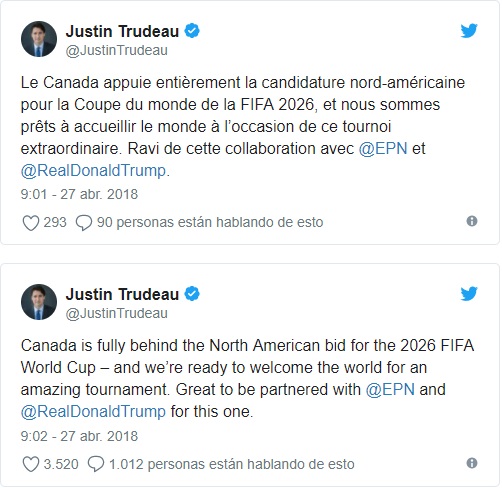 The 2018 FIFA World Cup will be held in Russia, but the US men’s national team will be watching it on television from home. By falling 2-1 to Trinidad and Tobago in their last qualifying match, the United States did not make it to the World Cup for the first time in more than 30 years.