“Surprising History” Is Now in Print

“Surprising History in Yucatán” appeared as a series of monthly articles in The Yucatan Times.  The stories attracted more than 50,000 readers when they came out over the past four years.  A newly published book presents the complete collection of these articles, which will interest fans as well as new readers.  The book includes reference material that did not appear in the on-line versions.

When the articles appeared on line, readers said they were “Amazing history,” “Fascinating reading,” and “Wonderful research.”  More comments showed that the stories about Yucatán’s history addressed real interests among English-speaking visitors and residents —

“The history brings a place to life.”

“Adds depth to our experiences.”

“So important for us to know.”

“Now I look at Yucatán differently.” 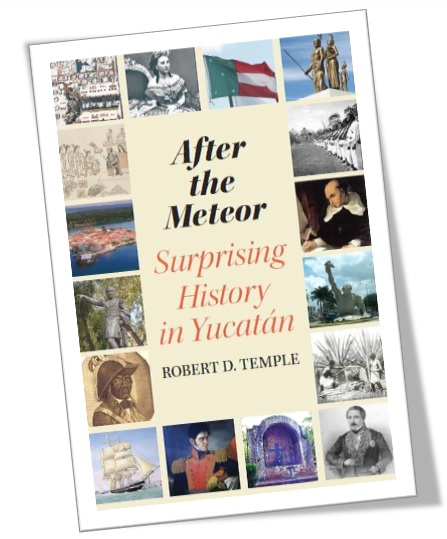 The title of the new book is “After the Meteor: Surprising History in Yucatán”.  This is not a typical history book.  It presents the pageant of Yucatán’s history through stories about the extraordinary people and events that shaped it.

The book features accounts of things that happened during Maya times; adventurers during discovery and conquest; unforgettable heroes, heroines, and villains.  Wars, rebellions, and naval battles range from deadly important to comically inept.  Readers learn about Yucatán’s highs and lows — hard-won independence, inspiring reforms, tragedies, poverty, and wealth.  The chapters describe places we can visit today that are directly connected with the history.

The author, Robert D. Temple, is a non-fiction writer who has published extensively, mostly on historical subjects.  Bob has been a part-time resident of Mérida for many years and at various other times lives in Ohio and Virginia.

In addition to his personal fascination with the long and complex history of this region, Bob tells us that he has a real interest in sharing these stories with other visitors and expat residents.  We enjoy Yucatán for the weather, culture, and food, but appreciating the history of the things around us can add new dimensions to our experiences.  He invites readers to “Be surprised.”

In Mérida, the book is available for purchase at the Mérida English Library (Calle 53 #524 between Calles 66 and 68, Colonia Central) and Librería Sedeculta (Calle 18 #204 between Calles 23 and 25, Colonia García Ginerés).

It is also available on-line from Amazon.com

Robert D. Temple, PhD, is the author of the award-winning book Edge Effects and numerous  magazine articles, mostly dealing with matters of local history.  He lives in Yucatán, Ohio, and  Virginia.  Some of these articles appeared in slightly different form, under the title “Tales of the  Mayab,” in an anthology published by the Mérida English Language Library in 2013.