People remember Mexican icon Pedro Infante in the place of his death, in Mérida, Yucatán

On Sunday 15 2018, Father Raymundo officiated a mass on Calle 54 x 87 in downtown Mérida, in memory of the Mexico’s most important icons, Pedro Infante Cruz.

On Monday, April 15, 1957, right at the corner of Calle 54 and Calle 87, spot named as “La Socorrito” the twin-engine XA-CUN of the TAMSA company in which pilot Víctor Vidal, Marciano Bautista and Pedro Infante were traveling crashed.

When the plane crashed Pedro Infante and two more people died, Ruth Rosell, 20 years old, and the child Baltasar Martín. The house where the aircraft fell is owned by Doña Remigia, who was 20 years old when that happened.

“We never expected a plane to fall on top of our house here in Calle 54, I remember the plane crashed and it burst into flames while we were all watching,” said Mrs. Remigia Garcia

With music, poems, a floral offering and endless anecdotes, the Yucatecans remembered Pedro Infante Cruz 61 years after his death.

“Pedro Infante has not died, Pedro Infante is still alive in his songs and that is the message we try to bring, to this place where I have been coming every April 15th, for many years,” said Justiniano Gorocica, another Mérida resident. 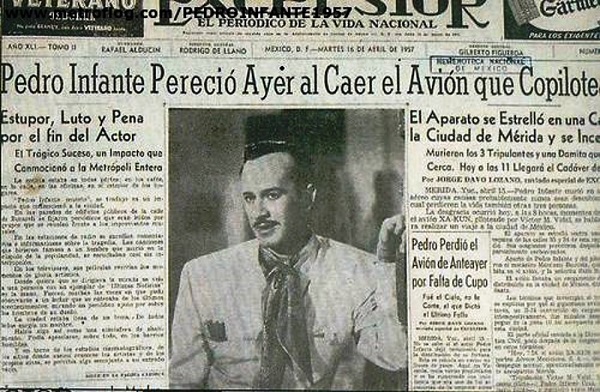 “My father departed 61 years ago, I am very happy to remember him like that, very happy like all the people here in Mérida,” said Armando Infante, son of Pedro Infante.

In the property where Pedro Infante died, a golden bust was installed, where people place flowers and photos, in memory of the movie star, singer and actor originally from Sonora, Mexico.