For a decade, Yucatan has experienced a change in its social structures; from practically non-existing to a series of movements from the modern Maya societies that have the intention of defending their land, their language, their heritage and their free self-determination, caused by three factors:

This was said by the anthropologist Rodrigo Llanes Salazar during the discussion seminar organized by the Peninsular Center in Humanities and Social Sciences (Centro Peninsular en Humanidades y en Ciencias Sociales: Cephcis) of the National Autonomous University of Mexico.

He said that the commitment of the government of Yucatan to a “new economic model” has generated the conformation of new social processes, due to the threats that this model represents to the life of the modern Maya society, specifically in territorial and environmental issues.

“Although projects such as the new Cervecería Yucateca are little addressed in social mobilizations, others such as clean energy, through wind and solar iindustral parks, are a source of conflict between investors / entrepreneurs and inhabitants of the rural communities where these projects are established”,  said the expert.

He explained that the Homún conflict, for a pig farm that could contaminate the water table, according to the local population, is an unprecedented fact in Yucatan in terms of social movements, and a perfet example of the evolution of these Maya communities.

“These type of social movements are happening for two reasons:

The first is that the Maya settlers are defending their free self-determination decision power, that enables them to decide which projects can be carried out in their territory, that affect or benefit their communities, and this goes beyond the simple obligatory public consultation -which never before happened in that municipality.

The second reason is that for the first time a social protest for the defense of the indigenous territory reached the streets of Mérida, since these indigenous people groups demonstrated in the state capital, along the iconic Paseo de Montejo. When society had not joined those types of issues before, nor had the inhabitants decided to protest publicly in the state capital,” Llanes Salazar concluded. 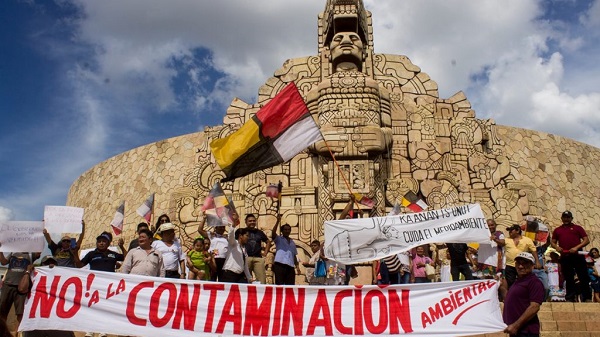 DISCLAIMER: The opinions hereby are those of the author and not necessarily those of The Yucatan Times.