Former Mexican President Vicente Fox has taken aim at U.S. President Donald Trumponce again, this time with the help of a clothing design.

On Friday, Fox shared a photograph on Twitter of himself wearing a new Trump-trolling T-shirt:

Its design depicts Trump as a baby who is making a wall from toy bricks. The slogan reads: “Can’t Build A Wall If Your Hands Are Too Small.”

Fox has long criticized Trump’s campaign promise to build a wall on the U.S.-Mexico border. 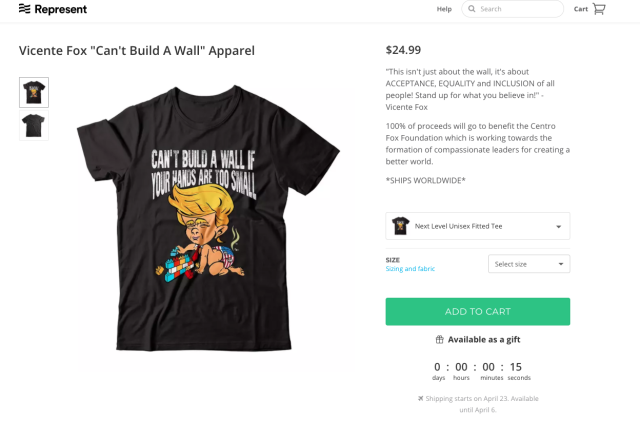 Fox also shared a link to the Represent.com online clothing store from where the $24.99 T-shirt could be bought until early Saturday. Pullover hoodies and long-sleeve tees featuring the same design were also available.

The products no longer appear to be available to purchase, however. The site notes the “campaign has finished.”

“This isn’t just about the wall, it’s about ACCEPTANCE, EQUALITY and INCLUSION of all people!” the items’ listings stated. It added that all proceeds would go toward Fox’s Centro Fox Foundation, which it said is “working towards the formation of compassionate leaders for creating a better world.”

Earlier on Friday, Fox warned American farmers that they would be the ones who suffer if Trump renegotiates the North American Free Trade Agreement and a trade war breaks out between Mexico and the U.S.

“You better speak up, because this guy is taking you to nowhere,” Fox told “Morning Joe.”