According to Bloomberg, Mexico’s presidential candidate Andres Manuel Lopez Obrador is leading by 12.5 percentage points in the latest opinion poll, a sign the race may be getting tighter as the July election draws near.

But according to Mexican pollster GEA-ISA (poll published by Forbes.com), Lopez Obrador, known as AMLO, leads only by 5 points, with 37 percent of voting intention, followed by Ricardo Anaya of the National Action Party-led coalition with 32 percent.

The results contrast with Bloomberg’s poll tracker, which currently shows the frontrunner 12.5 points ahead. 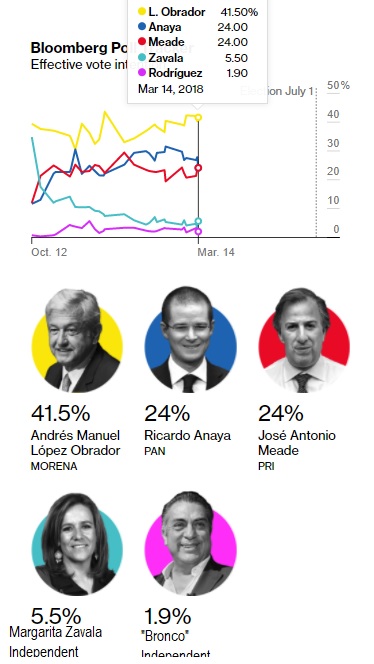 Mexico will elect in just over three months the largest number of officials in the nation’s history. The race is gearing up to be highly contentious as violence grows and a spate of corruption scandals rock the ruling Institutional Revolutionary Party.

Lopez Obrador, a leftist who’s pledged to halt Mexico’s oil reform, has maintained a consistent lead, while Anaya has promised to investigate President Enrique Peña Nieto on graft allegations. Meade has also made fighting corruption part of his platform, saying he’d strip political immunity from all officials in power.