What appeared to be undetonated explosives were found on a ferry that runs between the Caribbean resorts of Playa del Carmen and the island of Cozumel, authorities said Friday March 2, less than two weeks after a blast shook another ferry plying the same route.

Quintana Roo state prosecutor Miguel Angel Pech Cen said in interviews with Mexican media that the boat was anchored 500 yards (meters) from the Cozumel dock and was not in service when the object was discovered Thursday. He said a company diver reported the object, and Mexican navy divers removed it and handed it over to the Defense Department for analysis.

The announcement came on the heels of reports that a Feb. 21 explosion on a ferry owned by the same company and on the same route was caused by a bomb. That blast injured 19 Mexicans and at least five U.S. citizens. Authorities had initially suggested it could have been a mechanical malfunction.

The U.S. Embassy in Mexico said in a statement that it was barring its workers from taking any tourist ferries on that route because “undetonated explosive devices were found” on the boat. The region is one of the most popular travel destinations in Mexico.

“U.S. Government employees are prohibited from using all tourist ferries on this route until further notice. Mexican and U.S. law enforcement continue to investigate,” the embassy wrote.

Photos of the device published in local media showed what appeared to be a length of PVC pipe attached to the underside of a boat.

Pech Cen argued that there was no danger to tourists because the boat was out of service and far from the dock. He noted that the Defense Department had yet to issue a definitive finding on the nature of the object.

The state Tourism Department said the same in a statement and added that the vessel had not been in commercial service for over 10 months. State and federal prosecutors are investigating, it said, “and the cooperation of international agencies such as the FBI is accepted.” 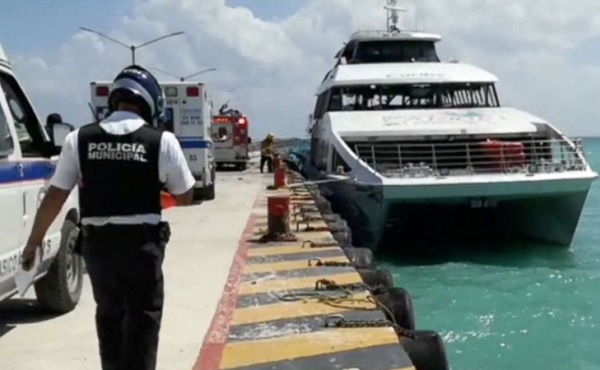 Among the lines of inquiry is the possibility that “the incidents are exclusively related to situations that are internal and inherent to the ferry line in question, which is not providing commercial service,” the statement said.

“I would say the effect on the tourist population is an undesired collateral effect of something that probably has some other motive,” federal Interior Secretary Alfonso Navarrete said.