Washington (CNN).- President Donald Trump, after listening to a series of emotional stories and pleas to enhance school safety at the White House Wednesday, floated the idea of arming teachers and school staff, an idea that was met with support from many of the attendees.

“If you had a teacher who was adept with the firearm, they could end the attack very quickly,” he said, stating that schools could arm up to 20% of their teachers to stop “maniacs” who may try and attack them.
“This would be obviously only for people who were very adept at handling a gun, and it would be, it’s called concealed carry, where a teacher would have a concealed gun on them. They’d go for special training and they would be there and you would no longer have a gun-free zone,” Trump said. “Gun-free zone to a maniac — because they’re all cowards — a gun-free zone is ‘let’s go in and let’s attack because bullets aren’t coming back at us.’ “ 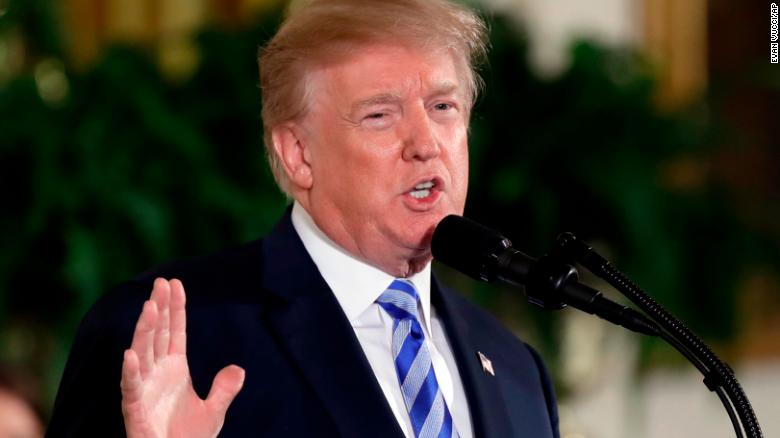 Trump on Thursday morning tweeted he “never said ‘give teachers guns'” and then repeated his quote from Wednesday about looking into the possibility of “giving concealed guns to adept teachers with military or special training.”
The comment came during a White House listening session marked by poignant testimony from students and parents affected by school shootings. Trump offered some solutions, calling for more mental institutions and hospitals in addition to the idea of arming teachers.
“I’m not here to debate, but I lost my sister. And like Mr. President said, if you could find 20% of maybe retired law enforcement officers, or a teacher who could go through discreet training to carry a firearm around his waist, it could’ve been a very different situation,” Hunter Pollack, one of Meadow Pollack’s brothers, said. “We need more security, we need more firearms on campus, we need better background checks, and we need to study more on mental health.”
Fred Abt, father of Parkland shooting survivor Carson Abt, said he had discussed with Education Secretary Betsy DeVos over lunch that rather than waiting for first responders to arrive, it would be more efficient to have firearms locked on school campuses.
“One possible solution, which may not be very popular, would be to have people in the school, teachers, administrators who have volunteered to have a firearm safely locked in the classroom who are given training throughout the year,” he said. “There are plenty of teachers who are already licensed to carry firearms, have them raise their hands to volunteer for the training, and when something like this starts, the first responders are already on campus.”
But not all agreed with that approach.
Nicole Hockley, whose six-year-old son was killed in the 2012 Sandy Hook elementary school shooting, took the microphone and told Trump she would rather arm teachers with ways to prevent shootings in the first place rather than with a firearm.
“Let’s talk about prevention,” Hockley said. “There is so much we can do to help this person before we reach this
point.”
But many others embraced the President’s idea.
Andrew Pollack, a father of one of the 17 victims who died in last week’s Florida shooting, said he was speaking
Wednesday because his daughter couldn’t.
“We as a country failed our children,” he said. “This shouldn’t happen.”
He asked how it was that America could protect its airports, its concerts, its embassies and even the elevators at the Department of Education, but not its schools.
Click here for full article on CNN
Source: CNN