The Altiplano Zoo in Tlaxcala, (Central Mexico) recently introduced their newest addition – an almost four-month-old white lion cub – to the press. White lions are unusual yet beautiful creatures that have been revered in folklore for centuries.

The cub was born at the zoo on October 28, 2017, weighing 1.5 pounds and measuring 25 centimeters in length. Though in good health, the baby lion was rejected by its mother at birth, making his chances of survival minimal.

By not getting the care and natural food that the white lioness should have given her newborn, the mission of increasing life expectancy now belonged to the caretakers of the Zoo, who’ve been caring for the little one and will continue to do so until he can fend for himself.

Originally from southern Africa, white lions are not albinos. Like blue eyes in humans, the animals’ white color is caused by a recessive gene shared by both parents. Since their light color makes them less effective hunters and more vulnerable to poachers, white lions are rarely found within their natural endemic range. With only 13 white lions in the wild (2015) and only about 300 in captivity, they are considered an endangered species.

The Altiplano Zoo, run by the Government of the State of Tlaxcala, has three other white lions, including the cub’s parents, Metztli(Moon) and Tonatiuh (Sun), who arrived at the zoo in 2015 from an Animal Management Unit (UMA) at the age of six. The zoo also has a two-year-old white lioness, who is unrelated to the cub. 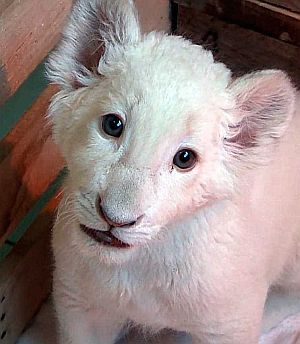 The first white lion to be born in captivity in Mexico, the Cachorro Milagro, (“Miracle Cub”) as his care givers like to call him, is growing stronger every day. He currently weighs 9 kilos, and his weight increases by between 90 to 100 grams every day, but this little lion needs a name.

Children visiting the zoo were invited to suggest a name the cub. Many entries were received and the winner will be announced on February 4. The cub is expected to be the zoo’s star attraction.