Origins and evolution of the Mérida Carnival

MÉRIDA, Yuc.-Through the years, the Merida Carnival has always gathered the families from all social levels in the state capital. Nevertheless, this important feast of jubilation, joy and tolerance has faced continous radical changes decade after decade in terms of organization, until finally becoming what it is today, a popular festivity carried out in Plaza Carnaval at the Xmatkuil fair grounds.

The “feast of the flesh” has an aristocratic origin in the “White City”, since it was used to promoted by intelectual elite groups interested in music, literature, poetry and the social interaction of Yucatán’s high society back in the XIX Century. However, the celebrations “ceased” on the year 1910, with the beginning of the Mexican Revolution.

According to the city chronicler Juan Francisco Peón Ancona, born in 1932, at the end of the 19th century and the beginning of the 20th century several festivals from the carnival of the Belle Époque existed in Merida, when Yucatan was probably the most wealthy region in Mexico, thanks to the “Yucatecan Green Gold” “Agave fourcroydes“, better known as Henequén.

During the administration of governor Olegario Molina Solís, rich people in Mérida used to decorate their own automobiles in a colorful way, dancing routines were prepared and organized by social groups  such as a La Unión y Paz or  El Liceo (Aristocratic Hall), to name a few, which used to parade down the streets of Centro in their own carriages, and these associations started to elect their own “queens” among the most attractive maidens of Yucatecan society.

All that glamour and splendor was diminished when General Salvador Alvarado Rubio arrived in 1915, as from that moment on, isolated carnivals organized by the high society began to take shape, such as the “private” carnivals at the Country Club during the 1920s, 30s, 40s and 50s; feasts organized by “La Unión y Paz“, where  prominent members of the Merida high society started dressing up as mestizos and mestizas in order to participate, have a good time and go unnoticed at the same time.

Another well-known Yucatecan specialist chronicler and historian Jorge Álvarez Rendón, conducted an investigation based on the Magazine known as “Revista de Merida“, a publication that started operations back in the XIX Century, and using information from local newspapers of that time, such as the “Pimienta y Mostaza“, recreated the carnivals of Merida of the years 1907 and 1908, with a narration in which he mentioned the story of his grandparents, and how they lived their last Carnival before getting married in 1909.

He added that even though the carnival “disappeared”, during the decades of the 20s and 30s there were still some demonstrations and dancing ceremonies in certain parts of the city, and it was until the 1940s when the custom of family walks without rehearsals returned, in a circuit that used to go from La Paz to La Mejorada, along Calle 59.

The chronicler explained that by the 1950s, the carnivals were boisterous and mainly attended by students and young people, without rules of any kind. There were just a few floats, but the festivity mood was there, thanks to the parade, and the decorated cars full of people dressed up in customes… there were “cowboys”, “pirates” and many men dressed as women too…

“It was a a more decent and colorful parade with allegorical cars, musicians and Cuban orchestras, all very neat,” Álvarez Rendón stated.

The chronicler recalled that the arrival of the Carnival to Paseo Montejo took place in the 1960s, it was sought to have a visual appeal and there was a vague idea of turning the “Carnaval” into a tourist event of some sort, so it was held as a parade with floats and the iconic “comparsas” or entertaining groups, The crowning of kings and queens (as in every other Carnival around the world), and the active participation of local schools, which has become a must up to this day during the Carnival. Prizes were offered for the best “comparsas“; and Paseo de Montejo turned into that unique magical space in which all members of the Mérida society could gather around, march down the street shoulder to shoulder, without socio-cultural or socio-economic differences whatsoever.

During the 1970s, 80 and 90s Paseo de Montejo was the Carnival’s venue par excellence, people not only from Mérida, but from all over the Peninsula used to come down to this magnificent avenue on the month of February to be part of the great “Carnaval“, and it was during those decades when an element appeared that would change the magic of Mérida’s Carnival forever, transforming it into a vulgar Bacchanalia where little by little respect for good habits, family values and healthy coexistence diluted, until it became an insecure place, lacking any family atmosphere, that element is called “free (or almost free) beer”…

And in the 21st Century, the “Carnaval” on Paseo de Montejo definitely turned into a time bomb, a booby trap, a tragedy waiting to happen in the heart of the “White City”, as approximatelly 100,000 people were literally consuming tons of beer, stomping along, with dozens of taco & torta stands as well as marquesita carts carrying LP gas tanks in questionable conditions, under a 40° Celsius weather, with thousands of people smoking carelessly around these stands, pushing each other as there was no space to walk.

Fights and brawls were common during Carnival now, and police officers couldn’t do their job properly, because basically they could not even walk through the crowd.

Not to mention the fact that homes and businesses around Paseo de Montejo had to barricade their doors during Carnival, as it was common to see a large number of men (and women) urinating in every corner, as there were no public toilets whatsoever, at the end of the four day celebration, the streets in the area were dirty, stinky and full of garbage… so for the residents of beautiful Paseo de Montejo, the carnival was no longer fun at all. 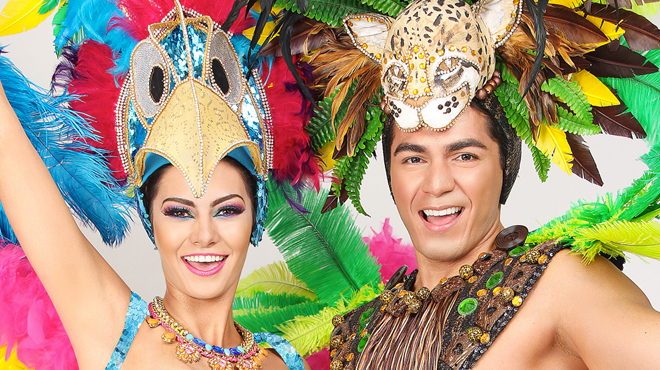 Thanks to the good common sense of Merida mayor Renan Barrera (who is currently looking for to be re-elected by the way), the “Carnaval” was moved to Xmatkuil fair grounds.

Thanks to that decision, Carnival means “party” again, and Xmatkuil is the best place to show off and dress up. There are many advantages at Plaza Carnaval, people can spend as long as they want there, they can move freely, it´s a lot more easier to get a front row seat to enjoy the parade, people can go to the Plaza Carnaval by car or public transportation, there are public restrooms and garbage cans all over the place, and police officers can supervise and make sure everybody is safe.

TYT Newsroom with information from: Sipse.com