Patricio, commonly known as Marichuy, was traveling with 10 campaign workers in a van on the transpeninsular highway in Mulegé, Baja California Sur, when it left the road and overturned. 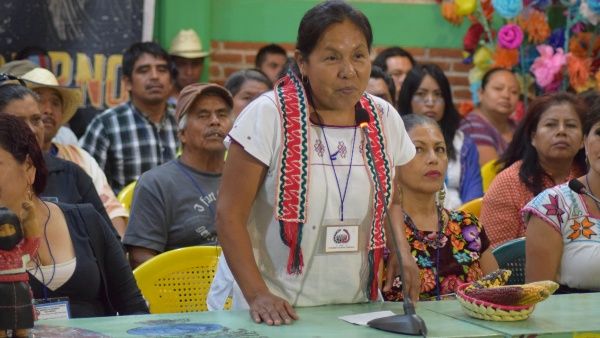 María de Jesús Patricio Martínez (also known as Marichuy), is a Mexican Nahua indigenous person, traditional medicine healer and human rights activist, that decided to run for the presidency as an independent candidate, representing the National Indigenous Congress (CNI) in the 2018 general election.

The candidate suffered a fractured arm and a head injury and was flown to a hospital in La Paz for treatment.

Eloísa Vega, a state representative on the council that is coordinating Patricio’s campaign, was killed in the crash, which occurred between San Ignacio and Vizcaíno.

Patricio had met earlier in the day with professors and students at the Autonomous University of Baja California Sur and was en route to Baja California.

With just four days to go until the deadline for independent candidates to collect the requisite number of signatures from supporters, Patricio is not likely to get her name on the ballot. As of Tuesday Feb. 13, she had collected just 241,000 of the 866,000 she needs.

But on Wednesday Feb. 14,  she told her audience at the university that the indigenous community would win regardless of the election result, because her campaign had met its objective to raise awareness of the problems facing Mexico’s indigenous people.

An outpouring of support via Twitter followed Patricio’s accident. President Enrique Peña Nieto was joined by several presidential candidates in wishing her well.