The flow of visitors grew by 12%, to 39.3 million travelers and its economic impact climbed by 8.6%, to 21.3 million US dollars; SECTUR foresees Mexico in the seventh place of the world tourism ranking this year.

Mexico continues to show its best face to international tourists despite the climate of insecurity that exists in some areas of the country, and during 2017 set a new record.

The number of arrivals has increased for six consecutive years. while in terms of revenue the figures have grown for five consecutive years, according to data disclosed by the Bank of Mexico (Banxico).

The Secretary of Tourism, Enrique de la Madrid, anticipated last month at the Tourism Fair of Spain that, at the end of 2017, for the fifth consecutive year, international tourism in Mexico has recorded historical figures, by receiving in different destinations over 39 million tourists, a growth of more than 60% during the first five years of this administration.

“We have a very good chance of positioning ourselves as the seventh most visited country in the world as a result of an intense promotion campaign in the United States, our main issuing market. In addition, we have tried to diversify actions in other countries in Latin America, Europe and Asia, taking advantage of the new air routes, including China, Japan and Korea,” De la Madrid said.

This is the list of the 10 most visited countries in the world during 2016: 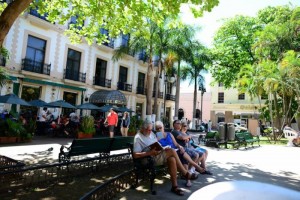 Last January, the World Tourism Organization (UNWTO) reported that international tourist arrivals registered an increase of 7% in 2017 to reach a total of 1,322 million, according to the latest UNWTO World Tourism Barometer. Forecasts indicate that this strong momentum will continue in 2018, with a rate of between 4% and 5%.

In Mexico, both the arrival of international tourists and foreign currency revenue had never grown at such an accelerated rate in a six-year term.

In the first five years of Enrique Peña Nieto’s presidency, both variables have expanded at an average annual rate of 10.9%, much higher than the 0.8% increase (arrival of tourists) and 1.5% (increase in foreign currency attraction) observed in the six-year period of Felipe Calderón or the 6.6% and 0.6% during the previous administration, when Vicente Fox was president.

This has been possible despite the constant travel alerts issued by the US government, such as the update it made in August last year in which it warned its citizens about the safety risk of traveling to Baja California, Baja California Sur, Chiapas, Colima, Guerrero, Quintana Roo and Veracruz.

The average expenditure of international tourists visiting Mexico also advanced in 2017, to reach 213.3 US dollars a day, which shows an annual growth of 3.41%, in comparison with the 145.3 US dollars a day average, recorded back in 2010.