Homun residents oppose the opening of pig farm in their municipality

“The Ka’anan Ts’onot organization (Guardians of the Cenotes) demonstrated in front of the Secretariat of Urban Development and Environment of the Government of the State of Yucatan (SEDUMA) to protest against the opening of a pig farm in the cenotes area of ​​the Homun municipality “informed Miguel Agustín Pro Juárez Rights Center.

The well-known reserve and ecotourism site is a protected area where industrial facilities that could contaminate the groundwater are not allowed, such is the case of a pork meat farm.

The industry pointed out even when some officials defend the farm and claim that the Mayans pollute more with their own farms. These versions were collected by the Integral Human Rights Information System of the Miguel Agustín Pro Rights Center.

This information system added that “the villagers denied that they own pig farms, and ratified that they will continue to fight legally to prevent the installation of the pig farm, as it would cause significant damage to the environment and, specifically, to the water table.

An big part of the population of Homún rejects the construction of this project because it will pollute the water of the cenotes, which are natural tourist attractions that have become a source of income for hundreds of families that also preserve the treasures of the prehispanic Mayan culture. 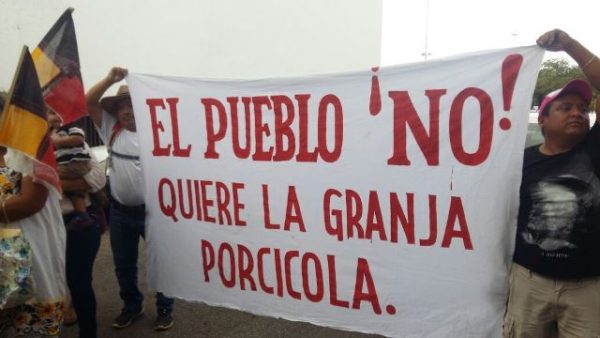 The group of residents has reported that their right to consultation has not been respected. They had been demonstrating to say NO to the pig farm since October, and they claim that the authoritires have not let them see the Manifest of Environmental Impact (MIA) that was approved by SEDUMA.

The people of Homun, legitimate beneficiaries of the cenotes, are not willing to allow the destruction of their environment that has also become a productive tourism activity, which generates employment for hundreds of people and has good prospects for the future.

Homun inhabitants oppose the farm because they feel the law is not showing respect for their Mayan uses and traditions, and they feel their rights are being violated, the farm has a wastewater treatment plant and.

On the other hand they are very upset because they were not consulted, the mayor Enrique Echeverría Chan illegally who they call arrogant, and blame him for the construction and use of soil permits improperly granted in the month of October 2016.

In June 2017 Echeverría Chan was forced to revoke these permits given the pressure exerted by the ejidatarios. The Alimentary Production company, is now sueing the City Council and the mayor.