In Mexico, there are 138 different species of bats, 38 of them are categorized “at risk” by the Mexican norm.

Bats are efficient to combat large amounts of harmful insects considered as agricultural pests, so the National Commission of Natural Protected Areas (CONANP), seeks to create a sanctuary for the species.

The National Commissioner of Protected Natural Areas, Alejandro del Mazo Maza, recognized the importance of the ecosystem services that bats provide to our nation and, and the great importance of the preservation of the caves where this species inhabit, since these caves are vital in their life cycle. The Commissioner assured that the protection of these animals must be a priority for Mexico.

The Conanp, in collaboration with experts of the Institute of Ecology of UNAM and of civil associations like Bioconciencia A.C. and Pronatura A. C., identified 7 caves throughout the country, which protection is essential for the survival of this species and to guarantee the benefits that are received from these animals.

One of these sites is the Cueva de la Boca, located in the municipality of Santiago, Nuevo León, 36 km south of the City of Monterrey, Nuevo León.

During the summer it hosts a maternity colony of 5 million bats of the species Tadarida brasiliensis; a species of approximately 9 cm long and weighing 15 grams that is of vital importance in the control of pests, since it feeds on several kinds of harmful moths and other insects.

This place is essential for the ecological health of the region, it is estimated that 1 million bats of this species get to ingest up to 1 ton of insects per night. In addition, this bat is a significant source of food for other relevant species such as the peregrine falcons (Falco peregrinus). It is the southernmost maternity colony known for this species.

Other maternity colonies of Tadarida brasiliensis are found in Texas, in the far north of Coahuila, Chihuahua and even Sonora. The Cave of the Mouth once housed one of the largest colonies of this species in Mexico, but due to vandalism and the lack of protection measures, the population has decreased significantly.

In the 1990s, binational efforts between Bat Conservation International (BCI) and the Mexican Bat Conservation Program (PCMM), allowed the population to increase due to the change of perception through long-term environmental educational programs. In 2006, Pronatura A.C. bought the land for its environmental protection; however, threats to the cave and the change in use of land have continued.

The Conanp along with the mayor of the municipality Santiago, the government of the State of Nuevo León, scientists from the UNAM and Pronatura Noreste AC, work to guarantee the conservation of this important cave, which in addition to ensuring the protection of the bats, will also provide a unique natural spectacle for visitors to the Magical Town of Santiago, a popular weekend destination for the residents of the city of Monterrey. 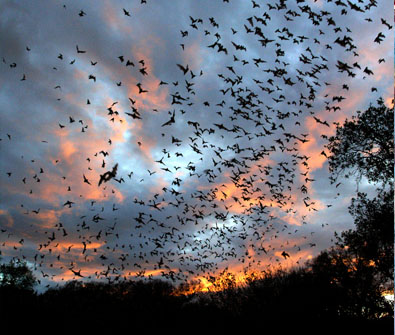 Probably one of the most important cave systems that serve as habitat for a large number of bats is located in Calakmul, Campeche.

Bats are efficient and important providers of “ecosystem services”: insectivores, controllers of pests that affect crops such as cotton and corn; frugivores who disperse seeds of the fruits they ingest regenerating the jungles and helping to produce food such as zapotes and guavas; nectarivores, that pollinate many species of plants, including some economically important as tequila and mezcalero agaves; and carnivores that control populations of rodents and reptiles.

Of the 1,300 species of bats that exist in the world, only 3 are fed by blood and, due to the lack of information, these anials are little appreciated and understood.

“Bats are probably the animals that have the most unfairly bad image. These animals give us benefits that touch every day of our lives,” said Rodrigo Medellín, expert bat researcher at the Institute of Ecology of the UNAM.