Social networks have become a very important parameter to measure the levels of acceptance that politicians have amongst citizens. They are a social “thermometer” as it is a restrictions free discussion space that provides up-to-date information (even if it is fake), but politicians (and their “advisors”) have fallen into the error of thinking that their popularity can be measured by the number of “followers” or “fans” they have in social networks, fact that is completely inaccurate.

This reasoning has caused that, during campaign periods, politicians make the mistake of buying “followers” or “fans” so that people may think these characters are popular, “loved and followed” by a large number of people.

Sadly, this is completely wrong. The impact that politicians have in social networks is not measured through the number of followers they have, but through the interaction, reaction and conversation they generate with their posts and publications, that is where the efectiveness of social networks relies. But apparently, politicians’ “consultants” think different.

In Adiscusión Diario an analysis of Jose Antonio Meade’s Facebook page was carried out, in order to find out if the PRI candidate was in fact as influential in social networks as he claims to be.

The analytical engine “Fanpage Karma” was used for this analysis, a tool designed in Germany that provides details and accurate data from any social network account.

The results of the analytics confirmed what has been said about the Meade campaign: things are not going well for the PRI candidate, so his work team opted for “unorthodox strategies”. One of the main findings has to do with the origin of the candidate’s “fans”.

Out of the 405 thousand fans that Meade had on Facebook at the moment the analysis was carried out , only 60% were actually Mexican. Almost 20% had their origin in India and a remaining 20% was distributed among countries such as China, United States, Thailand, Argentina and Chile, among others.

According to Adiscusión Diario, these data shows that the team of José Antonio Meade opted to “buy” fans. 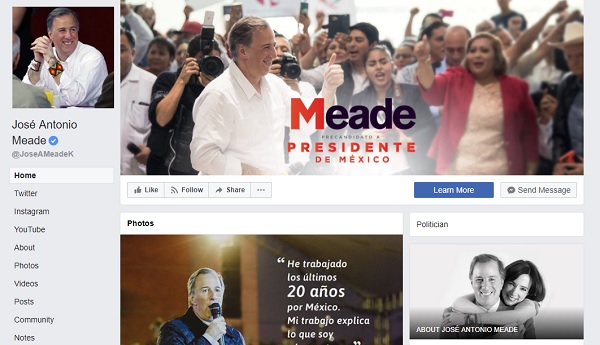 On the web there is a huge number of pages that offer this type of service: if the price is right, anybody can buy followers, fans, retweets, comments and even surveys, through the use of “bots” (fake accounts).

Fortunately, the origin of these “bots” can be tracked from analytical engines such as “Fanpage Karma“, and this is when things get difficult for politicians who choose this strategy because when people find out that a politician wants to “pull their leg“, they automatically begin to despise this person, for trying to decieve them.

TYT Newsroom with information from:  http://www.adiscusion.com.mx/