Mexico A Country Of Contrasts

The 41st edition of the Gallup Annual Global Survey indicates that Mexico is one of the five happiest countries in the world…  although it is also one of the most pessimistic. 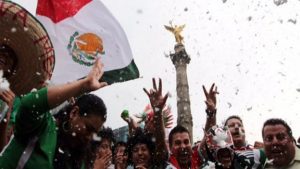 The organization explained that 53,769 people from 55 countries were interviewed to evaluate how happy or unhappy they felt. The results showed that there are variables that determine what this happiness depends on:

The Fiji Islands were positioned as the happiest country in the world, second is Colombia, followed by the Philippines, Mexico, Vietnam, Kazakhstan, Papua New Guinea, Indonesia and India. While Argentina and the Netherlands are tied in the tenth place.

THE MOST PESSIMISTIC PLACES

In the area of ​​economic optimism, 28% of respondents were optimistic about what will be this 2018, however, 30% declared pessimistic, 36% neutral and 6% did not answer the question.

Finally, Gallup pointed out that in the hope index, the results determined that 39% believe that this year will be better than 2017; 23% worse, 32% neutral and 6% did not know what to say about it.