Mérida’s Carnival is around the corner: what you need to know

The Carnaval de Mérida 2018, which slogan is “La fiesta que nos une” (the party that unites us), will take place from February 7 to 14.

The King and Queen this year will be Mosk Marrero and Tony Nusa (Antonio Cruz Peniche), both talk show hosts of a local radio station. The Carnival festivities will be carried out in the Plaza Carnaval, located in Xmaktuil.

-On Saturday February 3, will be taking place the festivities kick off with the “Concurso de comparsas”

-On Wednesday February 7, the Kings and Queens of the Carnival will be crowned. In the same event “La quema del mal humor” (The burning of the bad mood) will take place and afterwards, one of Mexico’s most famous musical groups “Los Ángeles Azules” will be performing live. 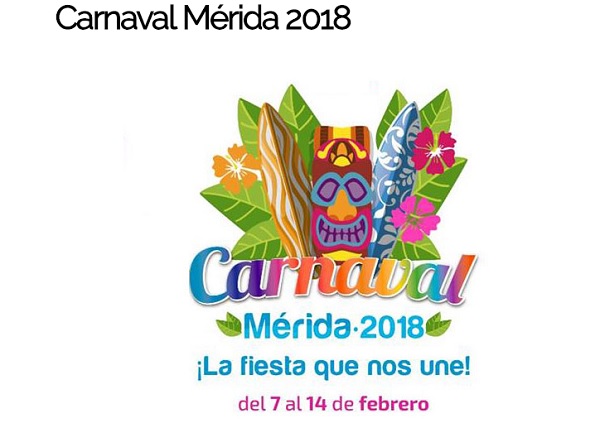 -On Thursday February 8, local children will be participating in the traditional Infantile Parade.

-During Friday February 9 in the evening, the Paseo de Corso will take place, with the presence of Mexican TV stars Gabriel Soto y Ariadne Díaz. After the parade, Aaron y su Grupo Ilusión along with Super Lamas will be giving a feature presentation.

– On Saturday February 10, the people of Mérida will be enoying the Sábado de Fantasía (Fantasy Saturday).

-Monday 12, is “Lunes Regional” or “Regional Monday, which features a great number of demonstrations of the Yucatecan culture.

-On Tuesday 13, the famous “Batalla de las flores” (Flower Battle) is held, with the parade of the decorated floats and the day will end with a concert of recording artist Christian Nodal.

-Finally, on Wednesday 14 the Carnival festivities will be officially finished with the reading of “Juan Carnaval’s ” will.