Meet the Mexican grandmother that inspired the “Coco” character

She is 88 years old and thanks to the power of the chancla (tong) she has raised 10 children and many more grandchildren. Her name is Pueblito Guzmán, and she is the woman that inspired PIXAR to create Miguel’s  grandmother, the star of ‘Coco’ the movie.

Pueblito, who was born in Querétaro but moved to Mexico City as a young girl, served as the model for many of the facial expressions and physical movements of the Abuelita character in Lee Unkrich and Adrian Molina’s Coco. 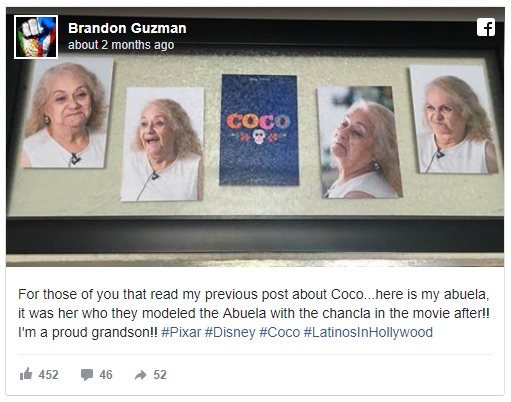 Pueblito became the inspiration for the ‘Abuelita’ character, thanks to Nick Rosario, one of the people in charge of the animation of the film, who is married to one of her granddaughters.

According to the site Remezcla, when Nick learned of the existence of the character, he immediately thought about his wife’s grandmother. Her gestures, her sayings, everything reminded Nick of her and the bond was made between Pueblito and the beloved grandmother. When Pixar needed more details for the “Abuelita” character, Nick immediately nominated Pueblito.

The chancla, the tamales, the traditions … all of these elements based the character on her.

“I used the chancla, a stick or anything at hand, I had 10 children! Imagine that! I used to threaten them with the chancla, I am very threatening,” Pueblito told Remezcla.

For Nick and Alonso, the most difficult part of the process was getting the courage to ask Pueblito to shake her arms and head in order for them to document the movement of the loose skin under her arms and around her neck. “It was kind of awkward asking an older woman to shake her jiggly parts for reference,” said Nick.