“Is It Cheaper To Live In Mexico?” cost of living study (co-sponsored by The Yucatan Times)

Lake Chapala, Jalisco, Mexico—January 20, 2018— Best Places In The World To Retire (Best Places) announced today the release of its second research study of 1,129 current expats living in Mexico, “Is It Cheaper To Live In Mexico?” The Yucatan Times was a co-sponsor of the study.

The Yucatan Times publlished 14 articles of a Mexico road trip series by Chuck Bolotin, from Best Places in the World to Retire. Chuck, his wife, and two dogs drove through Mexico in a large, white van. More than 12 months after they crossed the border into Mexico, Chuck’s posse made it all the way to the Yucatan.

The more surprising findings in this sutdy include:

“While certainly not the only reason people move to Mexico, the widely believed assertion that it is less expensive is one of them,”  said Chuck Bolotin, Vice President of Business Development. “However, just how much less will surprise a lot of people.  And it will also surprise a lot of people what the expats did with their rather significant savings.” 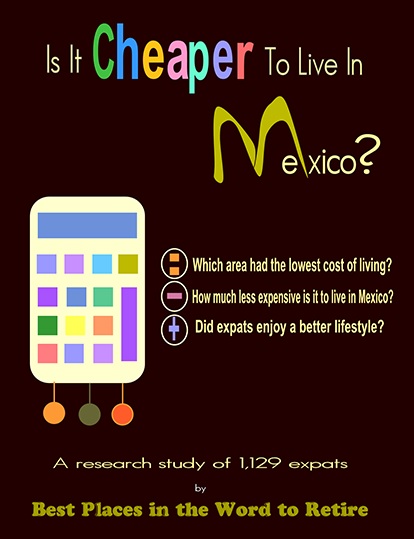 Alan Alexander, Chairman of the Best Places Advisory Board added, “As with our other studies, we designed this study to give realistic, actionable information to those considering moving to Mexico.  We also designed it as a resource for journalists.  For both audiences, the top-line, most interesting findings are highlighted in the introduction; there are lots of clear, interesting, and surprising graphs and charts; and there is commentary to help to explain it all, not only by the study’s authors, but also by hundreds of expats, who provide a very human, firsthand perspective to the numbers.”

“In addition to asking about how much items cost, what did they do with the money, and how has their lifestyle changed, we also asked our respondents if the amount of chores they did increased or decreased,” said Bolotin. “The reason we did this was to uncover the reality of a second component of cost of living: time.  How much time does it cost to live in Mexico?  In the end, this may be of the most interesting set of findings in the study.  This study is a ‘must read’ for anyone considering moving to Mexico or anyone interested in those who are.”

The research study, “Is It Really Cheaper To Live In Mexico” is available for download here.

About The Yucatan Times

The online newspaper The Yucatan Times began operations on December 4, 2010, initially created as an English language news website with weekly updates. On September 15th 2013, The Yucatan Times begins a new era, appointing a Content Manager to lead a team of editors, updating the site on a daily basis, implementing a Social Media strategy and designating an Editorial Board consisting of prominent members of the Expatriate Community in Merida, installing its offices on the legendary Paseo de Montejo Avenue.

Currently, The Yucatan Times is an online newspaper that targets the English-speaking community in the Yucatan Peninsula, the rest of Mexico, as well as English speakers around the world who are looking at the Yucatan region as their next travel destination or place of residence.

On July 2016 The San Miguel Times comes to light, and on January 2017, The Riviera Maya Times starts operations.

About Best Places in the World to Retire

Funded and run by an experienced group of entrepreneurs and investors based primarily in Southern Arizona and utilizing an innovative business model, Best Places In The World To Retire solves the problems of 1) those searching for “no spin,” organized, balanced, diverse and credible information about moving, doing business, or visiting abroad; and, 2) for-profit organizations seeking new clients and non-profit organizations seeking new donors and volunteers.

The site currently covers the most popular expat destinations in Panama, Mexico, Belize, Nicaragua, and Portugal.

The main areas of the site are: 1) Community Q & A, with thousands of answers to the most often asked questions about living abroad, provided by a community of experts; 2) Location Advisor, a real time, interactive, fun and informative questionnaire that recommends the best places to live; 3) Expat Stories, where real expats share their experiences; and, 4) Marketplace, where for-profit and non-profit organizations have their commercial listings, all tied into the questions they answered and the stories they posted.  The following are available for free download here:

Best Places in the World to Retire social media properties include its Facebook page and YouTube channel.