MÉRIDA, Yuc.- Humberto Hevia Jiménez, head of the Yucatán’s State Transport Departament (Dirección de Transporte del Estado de Yucatan: DTEY), assured that until now there is no increase in the public transport rate in Yucatan, and he discarded any kind of “adjustment” to these prices in the coming days as they have not met with the concessionaires to analyze the situation.

A few days ago, a rumor circulated in social networks saying that on January 29 the rates of public transportation in Merida would rise. Although the publication did not provide a valid source, indicated that the adult ticket would cost 11 pesos, 7 pesos for students and INAPAM, and 4 pesos for disabled people. 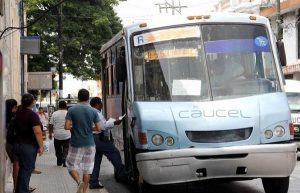 Humberto Hevia, explained that the information is totally false, as in fact they even included a fee on people with disabilities, when it is decreed by law, that disabled people with Situr credential, do not have to pay to use public transport.

He also recommended the population not to pay attention to rumors spread on social networks, and to be attentive to the information that is officially issued by the Government or the DTEY.

Hevia Jiménez concluded that, even though they regular working meetings with the concessionaires, who are the transport permit holders in Merida, there is nothing concrete in the analysis and this issue is expected to be resolved in the coming days.