From a distance, distinctive black-and-white plumed birds lounging on a sand bar contrast with their family cousins, the gulls and terns, loafing with them. Both sexes of the Black Skimmer wear the same tuxedo colors but males are larger. Plus during non-breeding season skimmers sport a white nape on its neck. 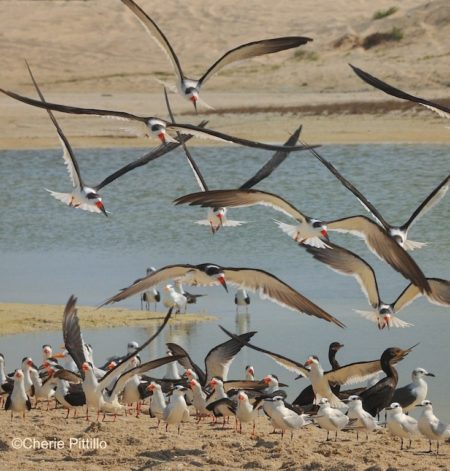 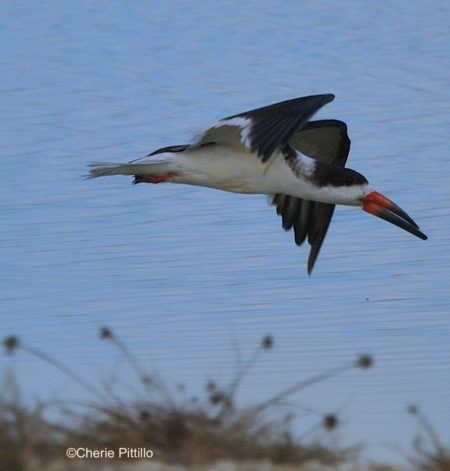 Black Skimmers rest and nest mainly on sand bars and beaches near shallow coastlines in North America and inland rivers and lakes in South America. A group may be called a scoop. In the Yucatan a resident population lives along the northeastern coast, but a winter migratory population visits the entire peninsular coast. I’ve photographed them at Isla Arena with gulls and terns, at Chuburna and Progreso with gulls, terns, cormorants, and Brown Pelicans, and in Brazil with terns. Sometimes they lounge on a vegetative mat; this one looks like a red shag carpet.

Hold onto your feathered caps, because I have the scoop on skimmer sexual behavior and unique adaptations.

The reputation of Studio 54, a former world-famous nightclub in New York City, holds nothing over these (sand) bar hoppers and beachy loungers. Anywhere from a few to thousands of pairs of Black Skimmers may nest in a colony on those bars along with gulls and terns. The monogamous skimmer pair may “kick up their heels” in sand to make several shallow scrapes and select one scrape for their nest.

By the way, after copulation, the female can finally swallow that fish gift she held in her mouth. In terns, the female usually swallows the fish before mating which is a distinguishing trait between the two species.

Not only is skimmer plumage conspicuous, but that red/orange-and-black bill looks like an upside down attachment due to a longer, lower bill. The entire bill widens at the base and then narrows and flattens towards the tip.

The Black Skimmer can boast as the only bird with the lower bill longer than the upper in the Americas. Also, unlike any other bird species, it flies that partially submerged lower mandible to skim surface water to catch its prey, mainly fish and sometimes crustaceans or mollusks. Studies indicate the male captures larger and different prey than the female during non-breeding season.

That knife-blade bill helps secure slippery fish while strong neck muscles aid to pull up prey. However, at hatching the chick’s mandibles are equal length but the bottom mandible grows about 2.5 inches (1 cm) within a month at fledging. That bottom jaw continues to grow twice as fast as the upper one, but it’s worn down by friction of hitting mud, sandy bottoms, or objects. It’s obvious why several other common names include scissorbill, razor-billed shearwater, and cutbill.

With four foot long, narrow wings, it seems improbable this long-necked waterbird could fly that close to water without diving or falling into it. That bill opens extremely wide so the top mandible doesn’t interfere. When the bottom bill touches a fish, the upper one snaps shut. Meanwhile the head and neck double under the body to secure the prize to either swallow the prey then or on land. Plus a muscular pseudo-sphincter in the esophagus may prevent swallowing water.

Active at dawn and dusk, it also feeds during the night. Their unique feeding technique is by touch which aids in night foraging. Scientists don’t think the bird can see its prey to pursue it. One theory states at night smaller fish rise closer to the surface and stronger winds may reduce then for easier skimming. The skimmer may make several passes back and forth across the same area which may attract fish closer to the disturbed surface.

Another unique adaptation of this species compared with the other 10,000 or now maybe 18,000 avian species relates to the skimmer’s eye pupil. It constricts cat-like to a vertical slit, perhaps to reduce glare from sunshine reflecting on water and sand and to protect the retina.

During the day it may also feed in-between bouts of resting and sleeping on those now famous sand bars with other skimmers. Also it spends time preening, which then seems to inspire contagious preening behavior of this web-footed waterbird. It’s almost like one for all and all for one!

SCOOP OUT TIME IN YOUR SCHEDULE TO ENJOY NATURE.

DISCLAIMER: References do not agree on details about these species.

Birds and Reserves of the Yucatan Peninsula, Sal a Pajarear Yucatan, A Guide to the Birds of Mexico and Northern Central America, Lives of North American Birds, The Sibley Guide to Bird Life and Behavior, Birds of Costa Rica, The Armchair Birder Goes Coastal, Burger, J. and M. Gochfeld. 1990b. The Black Skimmer: Social Dynamics of a Colonial Species.

By Cherie Pittillo for TYT