ANALYSIS: Mexico starts 2018 in the midst of discordant scenario

Mexicans begin 2018 amid a discordant scenario, of lawsuits between politicians who aspire to the presidency and the persistent threats of US President Donald Trump to cancel the North American Free Trade Agreement (NAFTA).

For the analysts last year it also transfers insecurity, homicides, robberies, kidnappings and extortion that made the nation one of the most violent in America and the world.

The newspaper El Financiero says that there is no social sector or entity that is free of the authentic epidemic that demonstrates the evident failure of the rule of law. 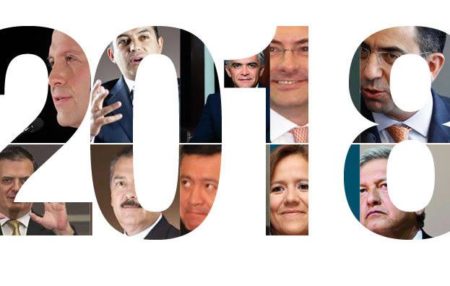 The economy is another sector lacking to improve the results, when the exchange insecurity is maintained.

The instability in this sector not only came from abroad, the country was damaged with the gasolinazo -increased fuel prices-, which continue to rise, more when the import of them increases due to failures in national production.

In addition, the arrival of Trump to the White House marked a turn in the bilateral relations and caused disagreements by migratory and commercial differences that follow in the limbo, and will be present in the next months.

Inflation makes its presence in this year about seven percent, among the items with rising prices are electricity, domestic gas, egg, tomato (tomatoes), air transport and tourism offers.

While the price of the American moderator shot above 20 Mexican pesos, it is very close to the highest figures in the last period. In January 2017, the dollar was sold at a maximum of 22.10 pesos.

Another negative drag is the government debts with the victims of the two earthquakes last September: the first of 8.2 degrees on the 7th, which practically devastated populations in the states of Oaxaca and Chiapas leaving almost a hundred dead and more than 120 thousand homes destroyed.

Twelve days later, on the 19th, a new one of 7.1 caused more destruction in those regions, as well as in Mexico City, Puebla and Morelos, with more than 400 deaths.

To this were added the disasters caused by two hurricanes that left billions of pesos in losses, damages in communities and homes, a balance of damages that to compensate for these resources await this year’s budget.

For the Economist’s analysts, 2018 will be another bad period, in all respects, for Mexico, marked by low growth, inflation at maximum, and a wave of violence that brings the number of murders to a record since they have statistics.

All this, accompanied by a much-contested presidential election that can lead to a change in the economic model.

While social and human rights organizations already announce the strengthening of their fight against poverty – 60 percent of the population lives in poverty -, the reforms implemented by the government, the discrimination of the indigenous population, as well as in defense of social rights.