Newspaper Vanguardia, reported yesterday that, during a rally in Saltillo Coahuila, Andrés Manuel López Obrador, candidate of Morena to the Presidency of the Republic, sent the structural reforms of the Government of Enrique Peña Nieto to “fuck off” -al carajo-

“They are a shame, they do not even have a development plan of their own for the country, they are nothing but a petty, puppet government in Mexico”, said Andrés Manuel López Obrador, presidential candidate of Morena.

Regarding the educational reform, something extremely needed in Mexico, since for many years education has been held hostage by teachers’ groups and unions. “From the first of December (date in which he would take the presidency oath) [the education reform] is going to be canceled” reiterated López Obrador, if he wins the elections in July.

On the tax reform, he said: “the economy decayed even more“, about the labor reform: “It affected the workers without any result” and about the energy reform: “a failure, because the electric and oil industry had never been so bad”. According to López Obrador, he leads the preferences in 28 of the 32 states of the Mexican Republic.

What could happen if López Obrador wins the election?
Again and again, López Obrador has denied being close to Venezuela and has dissociated himself from the Maduro regime… but has he ever condemned the murders of hundreds of opponents? No! Has ever uttered a word condemning the massacres of civilians? No. But, quite the contrary, his supporters deep in the structure of his political party, support Maduro´s murderer regime. Yeidkol Polevnski, Héctor Díaz-Polanco, John Ackerman -all close to López Obrador – and other closed collaborators linked to Morena are fervent promoters of the criminal government of Nicolás Maduro in Venezuela. We should ask ourselves why López Obrador has NEVER spoken against Maduro… Perhaps because he has the same political and economic project for Mexico as the “chavismo-madurismo” for Venezuela. 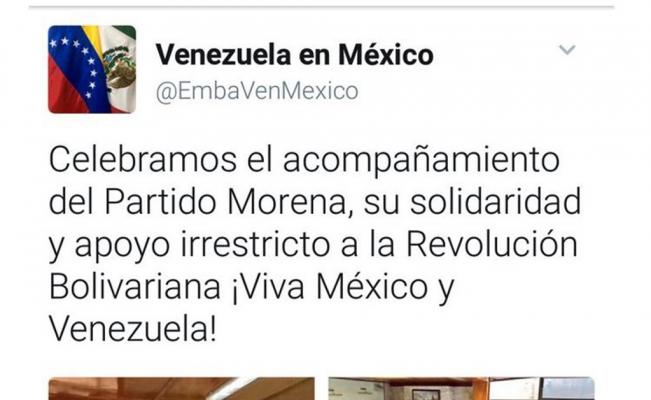 “We celebrate the accompaniment of the Morena Party, its solidarity and unrestricted support for the Bolivarian Revolution ¡Viva México and Venezuela!”

Here is another example of the support —of course, AMLO denies it— in Venezuela of the Maduro dictatorship in favor of López Obrador and MORENA

The ugly truth
Today in 2018, something inhumane happens in Venezuela. Venezuelans are consuming animal food. The situation is a dramatic consequence of the violation of the right to food by the Venezuelan State. Today food for DOGS is sold for human consumption in the supermarkets of Venezuela, because there is no food.

Let us not forget that until 1998, Venezuela was a democratic, relatively prosperous country with a medium to medium high quality of life, until populist charlatan Hugo Chávez exploited the frustrations of ordinary citizens to be elected president. Because of hunger, people has killed street dogs to eat —see note from the Daily Mail— or how about animals that have been stolen from the zoo parks in western Venezuela to be eaten by the hungry local population? —see note by Forbes—

Populist policies and messianic leaderships lead to the failure of many countries. History is full of examples and in more recent times, what better example than Venezuela. What happened in Venezuela —and it could perfectly happen in Mexico— is the product of economic failure of populism, they give money away (not theirs to give) and under the banner of “for the people”, they destroy free enterprise, expropriate properties, factories, banks, ranches, media, transport and any productive unit. A study of the universities Andrés Bello and Simón Bolívar, of Venezuela, with data from 2016, indicated that one out of every two households live in extreme poverty and 82% of the population is below the poverty line… in what used to be one the richest countries in Latin America.

Are things bad in Mexico?
Emphatically I say yes, VERY BAD. The government of president Peña Nieto has been beleaguered by acts of scandal, corruption and illicit enrichment and has left many large pending issues to be solved in almost all topics. Mexico needs to change its practices, its policies, its economical, legal and political system in order to improve, but today… Today we are free. Today we can travel, we can go places and most certainly, we do not have to go out and buy dog food because there is nothing else to eat.

Andrés Manuel López Obrador is a potential Chávez, a potential Maduro and Mexico can become Venezuela. Is that really what we want? Just as populism destroyed Venezuela, if López Obrador and Morena win… they could destroy Mexico.